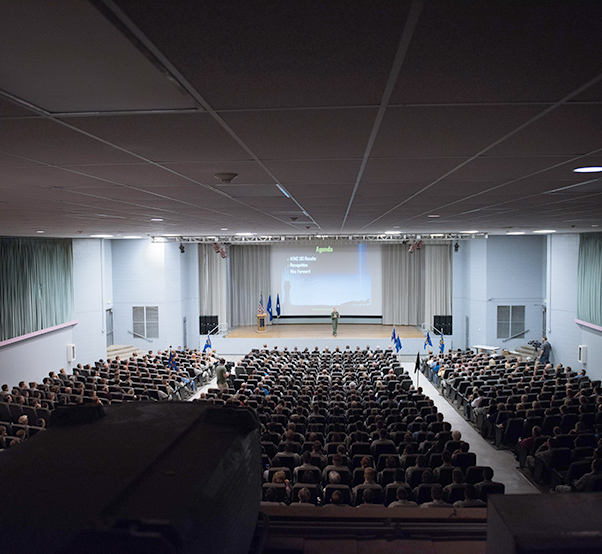 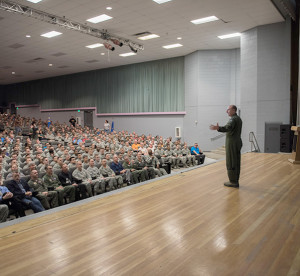 The base theater at Edwards Air Force Base, Calif., was filled to maximum capacity for a commander’s call May 5 to recognize the achievements of the 412th Test Wing in the recent Capstone Unit Effectiveness Inspection that ran April 25-28.

Team Edwards received a rating of Highly Effective, which is the highest possible grade, in Executing the Mission and Improving the Unit.

“We are crushing it; where ever you are at you’re crushing the mission,” said Brig. Gen. Carl Schaefer, 412th TW commander. “That is the feedback that I got … The things you are doing today is impacting downrange right now.”

Under the UEI process, wing members are responsible for assessing deficiencies in their units, reporting them to the inspector general and then devising and implementing a plan of action to correct any issues that arise. The process involves a mix of exercises, self-assessments, Airmen-to-IG sessions, no-notice inspections and an in-depth IG inspection of the unit every two years, with a wing Capstone UEI event every 24-30 months conducted by AFMC.

After many thanks from the general for a job well done, Schaefer had dozens of Team Edwards members come on stage and presented certificates of achievement for their extraordinary efforts, which helped contribute to the high inspection score.

“That is a huge deal to be recognized in what I believe is the best wing in AFMC. These are the best of the best and they represent a lot of people that are out here. I want to pass on, from me to you, a huge congratulations on this inspection. You came through with flying colors,” Schaefer said.

After the UEI portion of the commander’s call, Schaefer turned to the future in which he discussed the impending increase of active duty Airmen throughout the Air Force, especially in aircraft maintenance fields. He also touched on the upcoming programs that will bring an increase in planes and keep Edwards ever so busy in the coming years.