If you’re in the military, it’s a pretty safe bet that you know how your service branch is organized. But each service is different, and if you work in a joint-service atmosphere, it might help you to know each branch’s chain of command.

Or you might just be a civilian who wants to know what a soldier means when he says, “I’m with Charlie Company, 2nd Battalion, 501st Parachute Infantry Regiment, 1st Brigade Combat Team, 82nd Airborne Division.” Because, let’s be honest – that’s a lot harder to decipher than a civilian saying, “I work on the account management team.”

So if you’re not sure what the unit organization is for each Department of Defense service, here’s a cheat sheet for you. 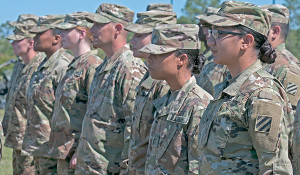 U.S. Army
Units from the bottom to the top:

Team: Usually made up of four soldiers.

Squad/Section: Consists of about 10 soldiers. A staff sergeant is in charge.

Platoon: Consists of a few squads and up to a few dozen soldiers. Run by a lieutenant.

Company: Commanded by a captain and consists of 3-4 platoons. There are anywhere from a few dozen soldiers to nearly 200.

Battalion: Consists of 4-6 companies and can include up to about 1,000 soldiers. Commanded by a lieutenant colonel.

Brigade: Consists of a few battalions and anywhere from 3,000-5,000 soldiers. A colonel is in command. Some battalions are organized into regiments instead of brigades. The armored cavalry, Rangers and Special Forces are examples of this.

Corps: These include 2-5 divisions with anywhere between 20,000-45,000 soldiers. A lieutenant general is in command.

Field Army: This consists of two or more corps and is run by a general. There are currently four field armies, each with a different mission. Usually, the number of the field army is spelled out (example – Third Army).

Army Group: Consists of 4-5 field armies and between 400,000 and 1 million soldiers. They’re commanded by a general and are considered self-sufficient for indefinite periods. They’re usually responsible for a particular geographic area. To differentiate them from a field army, Army groups are usually written with Arabic numerals (example – 12th Army Group)

Army Region: These are only used in times of large-scale war, such as World War II. They usually consist of three or more field armies. 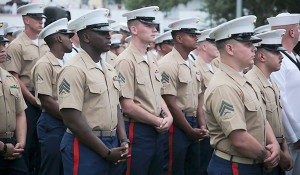 U.S. Marine Corps
While the U.S. Marine Corps falls under the Department of the Navy, its command structure is similar to the Army, except it follows the “rule of three.”

Platoon: Consists of three squads. Commanded by a lieutenant.

Company/Battery: Includes three or more platoons. Commanded by a captain. Companies are the lowest command level to have a headquarters element.

Battalion: Three or more companies. Commanded by a lieutenant colonel.

Three regiments/brigades make up a Division.

Three or more divisions make up the Marine Corps.

The Marine Corps’ leader, the commandant, reports directly to the Secretary of the Navy.

Exceptions:
Marine Expeditionary Forces:
These have more than 2,000 personnel and are normally formed by a ground combat element, aviation combat element and a combat service support element.

Marine Aviation:
Commands: These are made of squadrons (flying and nonflying units) that have up to two-dozen aircraft and are about the size equivalent of a battalion.

Groups: Formed of three or more squadrons, these are equivalent to a regiment.

Wings: Formed from three groups, they’re equivalent to a division. 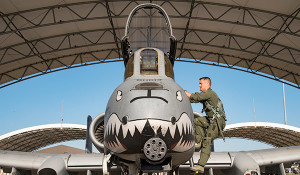 U.S. Air Force
Air Force structure is a bit of a mix of what you’ve already read above.

Section: Formed of two or more airmen (also known as an “element” in basic training).

Flight: There are three types of flights: numbered, alpha and functional. They can be made up of individual airmen or sections.

Squadron: Consists of two or more flights. It’s the lowest level of command with a headquarters element and is usually identified by number and function (example — 1st Reconnaissance Squadron). Usually commanded by a lieutenant colonel.

Group: Made up of two or more squadrons whose functions are similar to what the group is named (example — Medical Group). They are usually commanded by a colonel and mostly take on the number of the wing to which they’re assigned.

Wing: Two or more groups form wings. There are two types — composite and objective — and there’s only one wing assigned to a base. Usually they are commanded by a brigadier general. 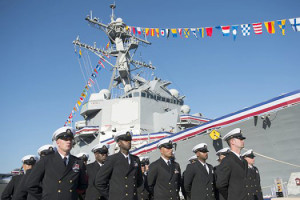 U.S. Navy
Everything above was pretty straightforward. The Navy’s structural organization? Not so much.

Unlike the other branches, there are two chains of command in the Navy:
Operational, which carries out specific missions such as operations and exercises (aka — execution); and

The two chains sometimes overlap, and depending on where you’re assigned, you might be part of both.

Operational:
The Secretary of Defense can issue orders directly to the nine combatant commands, which are joint forces. The combatant commanders then issue Navy-related orders to their naval subordinates, component commanders who carry out operations that fall in that COCOM’s area of responsibility.

There are six active fleets in the Navy, but they’re mostly too large for carrying out a specific operation, while individual ships, submarines, etc., are mostly too small for the task. So to carry out an order, the fleets can be divided into task forces, then task groups, then smaller task units and, if needed, task elements. Some fleets also have specifically grouped ships, like a carrier group, an expeditionary group, or a strike group.

When it comes to individual vessels, their operations are divided into departments, which can be broken into divisions. Sometimes smaller work centers are then formed.

If you’re in an aviation unit, you’re part of a squadron that’s part of an air wing that’s attached to a ship. That means you board the ship for drills, exercises and deployments, but otherwise, your home is a naval air station.

Then there are the Naval Construction Battalions (aka- SeaBees). They’re like the construction crew of the Navy and very similar to engineers in the Army. They build bases, roadways, airstrips and anything else that’s needed. Since they’re primarily land-based, their structure is more like that of the Army and Marine Corps.

Remember how I said there were two naval chains of command? Well, all that was just the first. Don’t forget about the second:

Administrative:
In the Department of the Navy, there is the civilian Secretary of the Navy and the military head known as the Chief of Naval Operations. The CNO is a four-star admiral who deals with all administrative matters and has several admirals, subordinate commanders and other staff working under him. These people help oversee specific functions within the Navy.

Then there are various commands:
Shore commands: These fall directly under the CNO. They are on-shore installations and facilities that support the fleets’ operating forces (ships, subs, etc.) with repairs, fuel, ammunition, training and medical help, among other things. The Office of Naval Intelligence, Naval Meteorology and Oceanography Command and Naval Strike and Air Warfare Center are examples of shore commands.

Type commands: For personnel, training and repairs issues, two of the Navy’s fleets – Pacific and Atlantic – are broken down further, with each having a command based on type: the Naval Surface Force, Naval Submarine Force, and Naval Air Force. The commanders of each of those coordinate to make sure their resources and procedures are compatible so it’s easier for sailors to transfer from coast to coast or command to command. Under the type commands are further breakdowns: Groups and ship squadrons or air wings.

Whew. That’s a lot, I know. To help, here’s an example of how it could work for an individual sailor:
You’ve been assigned to a destroyer. That means you’re basically assigned two different chains of command.

Administratively, your immediate supervisor would likely be the commander of a squadron or air wing, followed by the group commander and then either the type, system or shore command. As you do your duties, you would also be assigned to the fleet that corresponds with your home port. This will always remain the same as long as you’re assigned to that ship, sub, etc.

Operationally, things change when you deploy. You essentially leave your home port’s fleet and transfer into the fleet that corresponds with your ship’s new AOR. You then follow that operational chain of command, all the way up to the combatant commanders. If a mission comes up, your destroyer may be assigned to a task force, group, etc., to accomplish the task. Once it’s complete, your ship will continue on its routine schedule.

Still confused? You’re not alone. In fact, in the Bluejacket’s Manual that is essential for all sailors, one of the first things it says is, “Before trying to understand how the U.S. Navy is organized, you should be forewarned that it is complicated.”

So if you still have questions, you might want to reach out to any sailors you know to have them explain it!