Space enables everything the joint force does and the national security space architecture must protect and defend that capability in a contested environment, officials from the Air Force, the intelligence community and the Defense Department told a House panel in recent testimony.

Space domain
“Today there is nothing we do, and I repeat, nothing we do as a joint force that isn’t enabled by space,” Raymond said. “Integration has been our strength [but] we find ourselves at the intersection of high reliance and vulnerability in the space domain.”

Space is a warfighting domain just like air, land and sea, he added, and potential adversaries are developing capabilities to deny the United States access to and benefits of the space domain.

“Let me be very clear; we do not want a conflict that extends into space,” Raymond said, “but one way to keep that from happening is to make sure that we’re prepared for it and [can] fight and win that conflict if it were to occur.”

Space freedom
Buck said in his remarks that an overhaul is needed for the national security space architecture to guarantee freedoms in, through and from space.

“This is a challenge because our national security space architecture and processes were largely conceived to provide services or commodities during an era when our most significant coal orbital threat was debris,” he told the panel.

Today, he added, the responsibility is to gain and maintain space superiority, and some areas require continued focus and vigilance:
— Continue to normalize operations across the enterprise, improving foundational intelligence and providing robust indications and warning;
— Continue the work to deliver a next-generation battle space awareness and command-and-control capability;
— Review and update authorities and rules of engagement for space operations, and
— Continue to push fielding capabilities on operationally relevant timelines.

“We are the foundation of U.S. global situational awareness,” she said, “and we contribute to global intelligence and military and Homeland Security operations” while helping form national policy and achieve diplomatic goals. 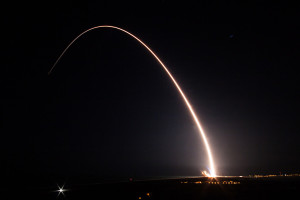 But staying ahead of adversaries who threaten U.S. space capabilities is a challenge, Sapp said, noting that adversaries are making space a priority and the United States is not keeping pace.

“I believe we have not made the investment that would indicate space is a priority or fundamental to the U.S.,” she said.

“Our requirements, budget and acquisition processes are disconnected and none of them moves quickly.” Sapp added. “… We must have processes that are integrated, that move faster and that demonstrate greater risk tolerance. We must recommit to space as a national priority and imperative.”

In his remarks, Cardillo said NGA is the main provider of geospatial intelligence, or GEOINT, for the Defense Department and the intelligence community. His agency’s support to military services, combatant commands and warfighters includes safe navigation, precise targeting, disaster recovery and tailored intelligence support, among others.

An explosion of data, he told the panel, “has driven the GEOINT discipline beyond the limits of human interpretation and explanation. By combining all the data now available to us with the use of algorithms, automated processing, machine-to-machine learning and artificial intelligence, we believe we can automate as much as 75 percent or more of the rote tasks we perform today.”

Getting to that point, Cardillo added, will require significant investments in IT architecture and research and development.

Also, he said, conservative estimates over the next 10 years predict that more than 9,000 commercial satellites will be launched, compared to fewer than 1,500 in the last 10 years.

Accordingly, he added, NGA and NRO will partner to engage with the most mature of the new commercial space providers via commercial GEOINT activity.

“Through it,” Cardillo said, “we will identify and evaluate emerging commercial GEOINT data and services against those needs that we capture and maintain.

Space security
In his remarks to the panel, Hill said the Defense Department today considers space security “in an era when Russia and China present anti-access area-denial strategies intended to prevent or counter U.S. intervention in crises or conflicts.”

Potential adversaries understand the U.S. reliance on space systems and many perceive this as a vulnerability, Hill said, making the attack of U.S. military space systems “a most tempting choice.”

He added, “Disabusing them of such misguided notions is a strategic priority.”