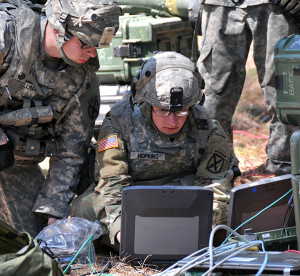 Soldiers from the 1st Brigade Combat Team, 10th Mountain Division (Light Infantry) work on laptops during their Joint Readiness Training Center rotation at Fort Polk, Louisiana in March. The Army’s Common Operating Environment (COE), expected to field in 2019, will begin to streamline warfighting systems into software applications. Helping to drive interoperability and risk reduction across programs of record for COE is the Federated Integration Environment, which virtually connects existing labs onto one network for holistic development efforts.

Much like a smartphone all but eliminates the need for separate personal devices such as a calculator, alarm clock, map and radio, the Army is bringing different technologies together to deliver warfighting systems, such as fires and navigation, as software “apps.”

To ensure that the apps work collectively, the Army is creating a distributed lab environment for earlier assessment that will increase interoperability, catch flaws rapidly and promote risk reduction efforts.

Known as the Federated Integration Environment, or FIE, the new concept virtually connects existing labs onto one network for holistic development efforts. FIE enables a wide variety of users located throughout the country and across different Programs or Record (PoRs) to conduct experiments that assess force alternatives and Concept of Operations, as well as tactics, techniques and procedures.

This is especially relevant when it comes to the Common Operating Environment, or COE. Expected to debut in 2019, the COE is made up of six computing environments housed in different areas of the country and consists of more than 150 PoRs.

“If you look at how we have to fight in an integrated manner, our ability to quickly upgrade capability and to integrate not only with our other systems but with our coalition partners and our other services is critical,” said Steffanie Easter, acting Assistant Secretary of the Army Acquisition, Logistics and Technology. “We have to get to the point where we can allow our Soldiers to just use apps and place additional capabilities on top of an existing framework so that they do not have to be encumbered with additional hardware and new software development.”

Not only does COE streamline capabilities for the user, it also modernizes the behind-the-scenes process that drives these systems to the field. With the FIE’s virtual and distributed environment, users – including those developing COE capabilities – can conduct evaluations and experiments for early risk reduction assessments of software infrastructure. Combat and materiel developers can also integrate and synchronize efforts in support of other Army priorities and emerging needs. Eventually, the FIE will enable users to achieve a successful Army Interoperability Certification (AIC), which is required to ensure that software not only works before it is fielded, but that it also works collectively when brought together with other systems and PoRs.

This distributed laboratory environment of the FIE stretches across the country, connecting virtually into a handful of select labs for early testing, development and integration of COE capabilities.

“The FIE enables testing and risk reduction to take place virtually, over the network and by using existing facilities, saving time and resources,” said Sherri Bystrowski, acting director of COE for the Army’s System of Systems Engineering and Integration Directorate. “COE is just one aspect, and this model will increase in importance as the Army rapidly integrates new cyber and electronic warfare tools. The FIE provides early assurance that these emerging capabilities work together.”

COE is not a materiel solution in and of itself, but instead provides software standards, protocols and infrastructure for interoperable apps that will be executed across the force. In other words, PoRs are required to implement COE. This is similar to a commercial developer who, when creating an app for a smartphone, must build to accepted standards already in place in order for the app to be compatible with the underlying system. As the Army implements COE, it will replace standalone hardware and provide a “plug and play” experience for Soldiers who can digitally share information across systems and echelons.

While program managers are responsible for ensuring that their individual capabilities work, there is currently no standard in place for ensuring all the products in the COE’s computing environments collaborate together.

For example, Sensor CE makes up 46 separate systems that must conform to COE standards.

“It would be extremely difficult and costly to execute technical tests and demos in a live environment with so many systems,” said Mike Cahill, Sensor CE test lead for Program Manager Terrestrial Sensors, based at Fort Belvoir, Va. “We knew we needed a distributed, virtual testing capability, which did not exist at that time, so Sensor CE created one in 2015. The FIE will take this initial concept created by Sensor CE and will enable multiple CEs and their subordinate systems to interact via a distributed capability and do formalized integration testing.”

FIE establishes a structure to reduce integration risk, facilitate rapid integration of applications and software, and allow multiple assessments and experiments to be conducted throughout the acquisition lifecycle.

“COE works across program executive offices, program managers, and PoRs,” said Scott Newman, Program Director, Systems Engineering & Integration, at the Communications-Electronics Research, Development and Engineering Center (CERDEC). “So there is not one owner of it. If you look at the Command Post CE there are several different program managers. The CEs are also located at different sites across the country. Yet there was a need to do early testing to make sure all the CEs talk to each other. From that need, the FIE was born.”

The Command, Control, Communications, Computers, Intelligence Surveillance and Reconnaissance (C4ISR) laboratory Newman oversees, known as the C4ISR Systems Integration Laboratory (CSIL) and located at Aberdeen Proving Ground (APG), Md., is at the center of FIE. Together the CSIL and APG’s Tactical Systems Integration Facility (TSIF), pulls in the hardware and software to represent CP CE, Mounted CE, Handheld CE and Sensor CE in multiple command settings. The CSIL and TSIF connect via a secure tunneling technology known as the Joint Mission Environment Test Capability (JMETC), which can then connect to other CE labs in order to perform testing.

This structure ensures that the lab replicates the constraints of the tactical network, which must operate in austere environments with little or no infrastructure in place. It also allows for evaluation against emerging threats such as cyberattacks.

“The FIE represents a new push in rapid prototyping, rapid development and rapid testing,” Newman said. “You can represent the tactical network in the field and you’re able to certify capabilities, but you don’t have to physically send people or resources.”

Initially, the FIE lab environment included facilities at APG, Redstone Arsenal and Ft. Belvoir. The concept allows for the Army’s Battle Labs across the country to connect, giving unprecedented access to new and emerging systems for Soldier feedback and training.

By recreating the battlefield network through a virtual, distributed environment, the Army will be able to troubleshoot early and often, while taking a coordinated and integrated approach to lab testing for COE and emerging technologies.

“Program managers often do testing on their own systems,” Bystrowski said. “But they must also run together on the Army’s network. FIE could help with that integration, particularly as the Army begins to roll out COE standards.”

After conducting several FIE workshops and a Rehearsal of Concept Drill, the Army is now working towards integration events that would incorporate FIE later this year. Each of these events will incorporate an increasing number of capabilities and facilities, steadily enhancing the functionality of the FIE and enabling it to address additional user needs.