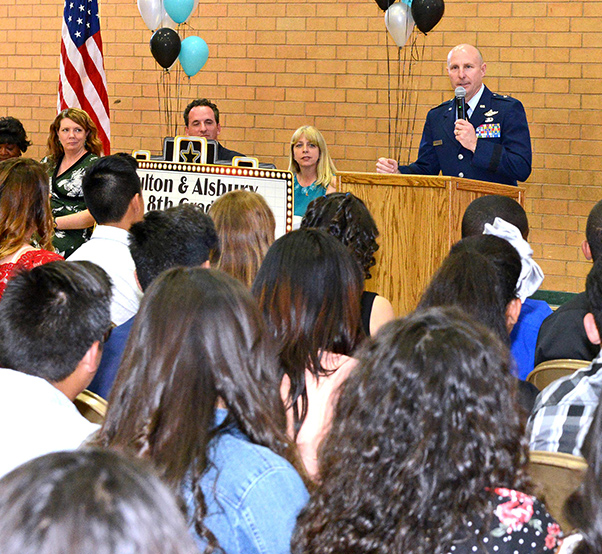 Brig. Gen. Carl Schaefer, 412th Test Wing commander at Edwards Air Force Base, Calif., had the unique honor of speaking at the first ever eighth grade promotion ceremony for Fulton and Alsbury Academy of Arts and Engineering in Lancaster, Calif.

The newly opened school held its first promotion ceremony next door in New Vista Middle School’s gymnasium, which was filled to capacity with family, friends and students.

Schaefer served as the VIP guest speaker for the ceremony. He urged the students to set goals and work hard to achieve them. Schaefer grew up with the Air Force as the son of an Airman. He reminisced about seeing jets flying and asking, “There’s people that get paid to do that? How do I do that?”

He said it was about middle school when he decided he wanted to fly jets for a living.

“So how do I do that? Well, I have to go to college to be a pilot and the place where you are guaranteed to fly is the Air Force Academy.”

Schaefer said he worked to complete all the requirements to get into the Air Force Academy. His father even drove him to the academy in Colorado to drop off his application in person to ensure it was received by the deadline.

The general also spoke about a 28-year-old Air Force master sergeant and single father that he helped become a pilot. He explained that there’s a lot a person has to do to become a pilot including going to Air Force Officer Training School and then flight training. After doing all that and overcoming a few obstacles, the former master sergeant later contacted Schaefer as a new lieutenant and pilot.

“If you find something you’re passionate about and it becomes a career, you’ll never work a day in your life,” Schaefer said.

According to the Lancaster School District, the Fulton and Alsbury Academy of Arts and Engineering is named after famed Air Force and NASA test pilot Fitz Fulton and Scaled Composites pilot Mike Alsbury who died in October 2014 in the crash of SpaceShipTwo. The year-old middle school is dedicated to students interested in rigorous and relevant studies in arts and engineering.