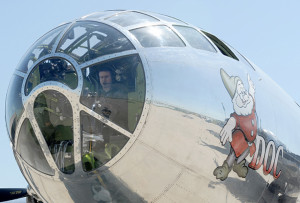 Wichita’s beloved B-29 Superfortress, Doc, took to the skies yet again June 9, 2017, from McConnell Air Force Base, this time with an added aspect of historical significance and Air Force heritage.

Sitting in the co-pilot seat was Brig. Gen. Paul Tibbets IV, the 509th Bomb Wing commander. Taking control of the aircraft means he has now flown the only two currently operational B-29s, Doc and Fifi.

In 1998, Tibbets IV, flew Fifi with his grandfather, retired Brig. Gen. Paul Tibbets Jr., who piloted the B-29 Enola Gay when the aircraft and its crew dropped an atomic bomb on Japan, helping end World War II.

“The only time I ever flew with my grandfather was with Fifi,” said Tibbets IV. “He had given up aviation and had not flown in any aircraft in a very long time. He and I got to fly Fifi together, which was awesome. It was a great opportunity for me to be with him.”

“It’s really about upholding the legacy of those who have come before,” he said. “When we have the opportunity to embrace that kind of heritage and that kind of history, it’s a real privilege and an honor.”

Before the flight, Doc’s pilot, Mark Novak, described the significance of having Tibbets IV on board. 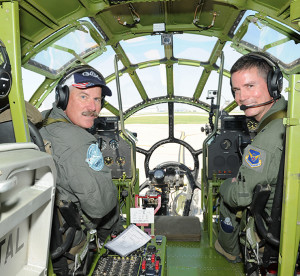 “Doc is a piece of history, and the Tibbets name is historic because anyone who knows WWII knows about the general’s grandfather, Paul Tibbets Jr.,” said Novak. “I’ve known (Tibbets IV) for years and we’ll each get a turn to fly. It’ll be a great time to chat and catch up over our hour-long flight.”

Tibbets IV emphasized his appreciation for the time and effort the volunteers put into restoring Doc and bringing this piece of history back to life.

“When you think about Doc and you think about Fifi and all these warbirds that we have, they’re labors of love,” he said. “We’re excited for (the volunteers), and their continued work. They’re going to get to educate tens of thousands of people about the B-29 because they poured their heart and souls into this airplane. This helps us connect those that are here today to those that have come before us, and how important it is to understand what they did for us. This is what changed the world.”

The flight took Doc to Whiteman AFB, Mo. to be part of the Wings Over Whiteman Airshow and open house June 10 and 11, to commemorate the 70th Anniversary of the Air Force.