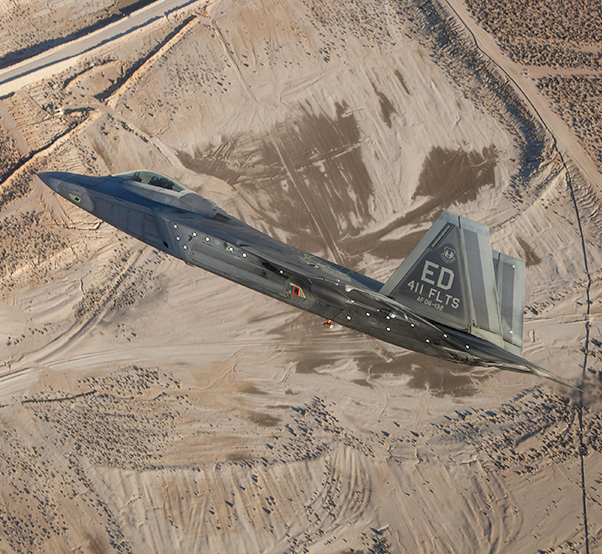 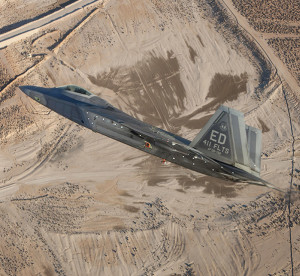 When the 411th Flight Test Squadron’s F-22 Modernization Team at Edwards Air Force Base, Calif., was tasked with a short-notice, quick-turn test, the members never imagined it would help garner them national recognition.

But that’s exactly what happened when the team integrated software into the aircraft that interfaces the Military Grid Reference System with the Air Force’s latitude longitude GPS based navigation system.

The MGRS was originally proposed by the U.S. Army and Marine Corps to simplify coordinate exchange for the soldier or marine in the field. It is based on maps which are divided into grids in 1,000 meter squares with the equator, the prime meridian and the international dateline as references. Latitude and longitude, however are based on the degrees and minutes of a compass.

When a Soldier or Marine in the field identifies a target, the Raptor’s systems must be able to convert those grid coordinates into latitude and longitude for accurate targeting.  Integration of MGRS into the Raptor allows it to do just that.

The team fielded the system within five months, enabling accurate air strikes against ISIS in Syria in May of 2016.

Lt. Col. Lee Bryant, commander of the 411th Flight Test Squadron, was the unit’s director of operations at the time of the testing.

“It was a quick reaction project,” he said. “Within a month of test completion the new capability was successfully utilized to strike ISIS targets in Syria.”

It was the quick integration of the MGRS capability, along with the 411th’s Raptor modernization efforts, that earned them the Air Force Association’s 2017 Citation of Honor Aerospace Award.

Bryant said the award is great recognition for a team that is pretty unique.

“Everyone works together to ensure the war fighter gets what they need – military, government and contractors – everyone has the same focus and goes out of their way to take care of each other as a CTF family.  It is their hard work that is enabling the Raptor to drop bombs in Syria in addition to remaining dominant in any future near-peer conflict.”

Bryant added that the projects the team is doing now are also setting the stage for future projects.

“In addition to quick reaction projects such as MGRS, ongoing Raptor modernization efforts are focused on where Raptor is going in the near future,” he said. “What we’re doing, you could almost call it Raptor 2.0, is essentially a rebirth of the Raptor and what it can do. We’re making sure the Raptor, with its first look, first shot, first kill capability, continues to be the most capable fifth-generation fighter in the world.”