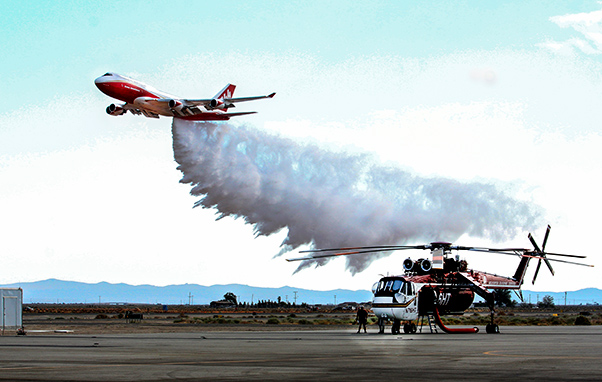 A Boeing Global SuperTanker dumps water and retardant over a 4,000 foot long test grid at Gen. William J. Fox Airfield while crew members of a Skycrane watch. More tests are scheduled to test for accuracy of dispersed drops.

A Boeing 747-400 Global SuperTanker is the first of a series of planes to use Gen. William J. Fox Airfield in Lancaster, Calif., as a testing point to measure the accuracy of fire retardant drops using a 200 foot-wide by 4,000 foot-long test grid.

“This is part of federal certification for the SuperTanker to measure the accuracy of laying down a retardant,” explained Allen Hoffman, Boeing site manager for Edwards Air Force Base, who watched the sunrise testing June 24.

The grid consists of thousands of metal fence posts holding paper cups to measure how much water or retardant is captured. After each pass the ground crew measures each numbered cup.

Currently based out of Colorado Springs, Colo., the SuperTanker has the capability to fly 600 mph and carry 20,000 gallons of water or fire retardant. The modified Boeing 747-400 can reach nearly any fire in the United States in under three hours. “It’s another fine Boeing product we are very proud of,” said Hoffman.

The Global SuperTanker can be almost anywhere in the world in under 20 hours, including re-fueling stops. Configured with 14 first-class seats and two bunks for the support staff and additional flight crew, the SuperTanker arrives ready to begin previously coordinated flight operations with the host agency.

Carrying twice as much fire retardant as the largest air tanker currently in service, it also can disperse 10 times as much retardant as a conventional firefighting helicopter. Two separate, constant flow systems are pressurized which allows for either continuous discharge or up to eight segmented drops. The system is approved for retardant, gel, foam and water drops or the combination of any two agents.

Ground servicing for sorties took a little over a half hour to fill the retardant tanks and was conducted at the Mojave Air and Space Port, due to its longer taxiway.

Other testing at Fox Field will include a converted MD-87 jetliner and a former C-130.