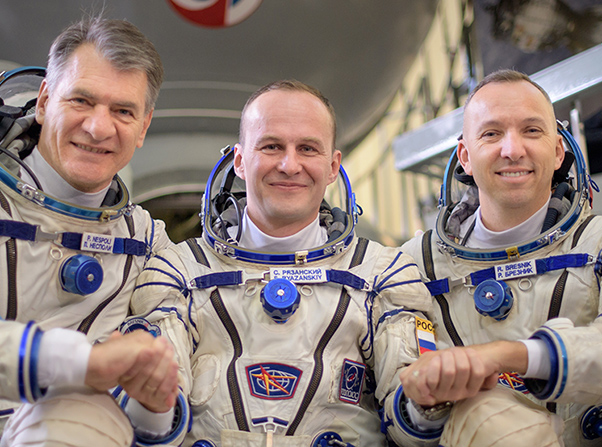 Expedition 52 flight engineers Paolo Nespoli of ESA, left, Sergey Ryazanskiy of Roscosmos, and Randy Bresnik of NASA pose for a photograph outside the Soyuz simulator.

Three new crew members for the International Space Station are scheduled to launch on July 28.

Live launch coverage will begin at 10:45 a.m., EDT, on NASA Television and the agency’s website.

NASA astronaut Randy Bresnik, Sergey Ryazanskiy of Roscosmos and Paolo Nespoli of ESA (European Space Agency) will launch at 11:41 a.m. from the Baikonur Cosmodrome in Kazakhstan. The Expedition 52/53 crew will spend more than four months together aboard the orbital complex before returning to Earth in December. Video of prelaunch activities from the crew’s activities in Baikonur will air July 24-27 on NASA TV.

After launching, the trio will travel for six hours in the Soyuz MS-05 spacecraft before docking to the space station’s Rassvet module at 6 p.m. NASA TV coverage of the docking will begin at 5:15 p.m.

Hatches between the Soyuz and station will open at approximately 7:40 p.m. The arriving crew will be welcomed onboard by Expedition 52 Commander Fyodor Yurchikhin of Roscosmos and Flight Engineers Peggy Whitson and Jack Fischer of NASA. Coverage of hatch opening and welcoming ceremonies will begin at 7 p.m.

The soon-to-be six crew members of Expedition 52 will continue work on hundreds of experiments in biology, biotechnology, physical science and Earth science aboard the International Space Station.

Keep up with the International Space Station, and its research and crews, at https://www.nasa.gov/station.

Get breaking news, images and features from the station on Instagram and Twitter at http://instagram.com/iss and https://twitter.com/Space_Station.