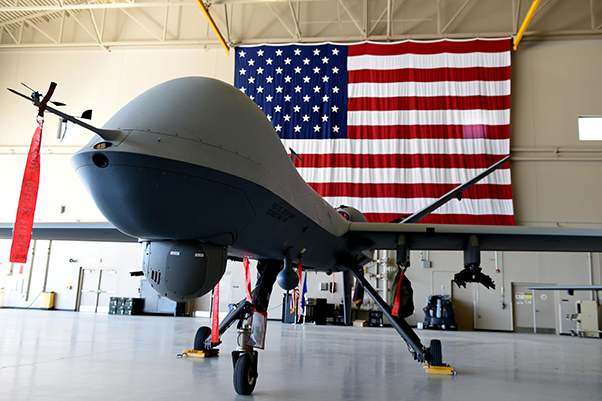 During this Red Flag, the MQ-9 crews aimed to prove the Reaper’s multi-role capabilities and train over new and evolving tactics.

“The mission with Red Flag 17-3 with the MQ-9s were air interdiction, dynamic targeting, and combat search and rescue,” said Staff Sgt. Zach, 22nd Attack Squadron sensor operator. “We had three different scenarios every day and the real challenge was learning how to integrate with other assets in the package and educating them on what we bring to the fight. For the MQ-9 we can bring high-fidelity sensors and precision weapons.”

During the large force exercise the crews integrated with not only fighter, bomber and command and control aircraft, but also with joint and coalition air frames as well. Notably, the Reaper joined forces with the Air Force F-35A Lightning II and U.S. Marine Corps F-35B.

“The big picture we were trying to drive here was how to integrate those fourth generation aircraft and fifth generation together,” said Capt Michael, 17th ATKS pilot. “The F-35’s had different capabilities and mission sets, but when we’re working with them, we’re looking at how we can help them do their job better and how can they enable us to get to where we need to go to execute our mission.”

During counter-air and air-interdiction missions, MQ-9s and F-35s used each other’s unique abilities to work together and create synergistic effects between the platforms.

“What everyone starts to see is the fact that no one system will win the war,” Michael said. “They might win one specific engagement but it takes everybody working together to achieve overall victory.”

“One thing we really try to market ourselves on, is that we bring a lot to the fight and can bring more to the table than they think we can,” said Capt. Leo, 17th ATKS pilot. “The preconceived notion is that we’re unmanned and don’t matter, however, we’re able to play on our strengths to help integrate and achieve overall mission success.”

The MQ-9s are able to use their 20 hours or more loiter time to provide increased battlefield awareness, adding to the ability of finding targets with precision weapons in today’s tight urban environments.

Exercises such as Red Flag offer distinct challenges for aircrews to integrate cohesively in order to prepare for the next potential fight so that if and when it occurs, they will be ready.

“When we consider the contested environment we know that with potential enemies we need to be ready for their capabilities,” Michael said. “What we train for here is directly related to what we may encounter in the future. We have to be able to combat other hostile capabilities against us.”

During the exercise scenarios, MQ-9 crews worked alongside the electronic officer course to overcome and restore issues such as degradation of communications, navigations, and link systems.

Overall, all of the MQ-9 aircrew members expressed that opportunities like Red Flag are vital to ensuring a combat ready Air Force.

“It’s very important for us to participate in Red Flag because we get to learn what other platforms do and showcase our capabilities while learning how to integrate seamlessly,” Leo said. “We then take this experience and teach our fellow aircrews so that we’re always prepared for the mission at hand.”