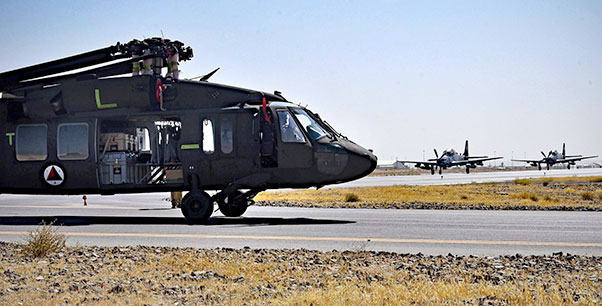 An Afghan Air Force UH-60 is towed as two AAF A-29s taxi for take-off Sept. 18, 2017, at Kandahar Airfield, Afghanistan. The UH-60 was the first to arrive in Afghanistan as part of modernization efforts to transition the AAF to a more sustainable and modern helicopter fleet.

The UH-60s are the first to be delivered to the AAF under the Aviation Transition and Modernization program. The plan to modernize and increase the AAF fleet will provide firepower and mobility enabling the Afghan National Defense and Security Forces to bring a decisive advantage to the fight against anti-government forces.

The first group of UH-60s will remain at Kandahar Airfield, where flight training for Afghan pilots is slated to begin in October. Air advisers assigned to Train, Advise, Assist Command-Air, 738th Air Expeditionary Advisory Group, will oversee the training program. Over the coming years, additional Blackhawks will be distributed to four primary AAF bases throughout Afghanistan.

“The AAF has grown in the last year and they’re asymmetric effects are changing the battlefield,” said Col. Armando Fiterre, 738th AEAG commander, TAAC-Air. “As the AAF mission grows they are becoming a more modernized, sustainable and more capable air force.”

“The Blackhawks will gradually be replacing the Mi-17 in the AAF inventory over the next few years,” said Brig. Gen. Phillip Stewart, commander of the 438th Air Expeditionary Wing and Train, Advise, Assist Command-Air. “While the Mi-17 is one of the AAF’s most advanced programs when it comes to aircrew and maintenance capabilities, the program cannot be continued indefinitely. The Mi-17s are expensive to maintain, difficult to sustain and experiencing higher than expected attrition rates.”

Earlier in this year, the U.S. committed more than $814 million for fiscal year 2017, funded by the U.S. Contingency Operations Afghan Security Forces Fund.

The funding will be used to shape and modernize the Afghan fleet over the next several years by procuring UH-60s, with refurbishment and modification of the first 18; additional armed MD-530F helicopters, A-29 attack aircraft and AC-208s aircraft, which will provide Afghan National Defense and Security Forces an advantage on its domestic battlefields. 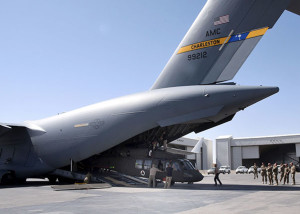 An Afghan Air Force UH-60 is off loaded from a C-17 Globemaster, Sept. 18, 2017, at Kandahar Airfield, Afghanistan. Train, Advise, Assist Command-Air advisors have worked closely with their Afghan counterparts to prepare for the modernization of the AAF, as the service transitions from Mi-17s to UH-60s. These are the first AAF UH-60s to arrive in country.

“The UH-60 training will involve a blend of contractors, military and Afghan pilots,” Stewart said. “The Afghan Air Force will begin by transitioning Mi-17 pilots and maintainers as we expect they will adapt faster to the Blackhawk.”

Once the Afghans aviators graduate and become mission ready, combat missions will be planned and conducted by AAF crews independent of coalition forces.

“Growing an air force takes time, it takes many years of training and planning during peace time and the Afghans are doing this during war,” Fiterre said. “It is a herculean effort for the Afghans, and frankly, they are knocking this achievement out of the park.”

The primary purpose of the UH-60 will be for troop and cargo transport, including casualty evacuation.

However, in addition to the 61 base model UH-60s, the AAF will also receive 58 UH-60 models with fixed forward-fire capabilities. According to TAAC-Air advisors, these numbers are based on the final forecasted end strength, assuming no attrition.

“The mission of TAAC-Air is to help our Afghan partners build a professional, capable and sustainable air force,” Stewart said. “We stand ready to give our Afghan counterparts the best training and assistance possible, regardless of what aircraft they are flying.”