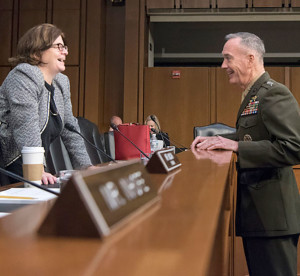 The Senate voted Sept. 27, 2017, to confirm Marine Corps Gen. Joe Dunford to another two-year term as chairman of the Joint Chiefs of Staff. Nebraska Sen. Deb Fischer is pictured here speaking to Dunford at his Senate Armed Services Committee reconfirmation hearing in the Senate Hart Building in Washington, D.C., Sept. 26, 2017.

The U.S. Senate Sept. 27 agreed to Marine Corps Gen. Joe Dunford’s reappointment for another two-year term as chairman of the Joint Chiefs of Staff.

Dunford will continue to serve as the principal military adviser to the president, the secretary of defense and the rest of the National Security Council through Sept. 30, 2019.

The general’s reconfirmation as chairman came via voice vote.

Dunford was nominated as the highest-ranking U.S. military official in 2015. President Donald J. Trump announced his intent to renominate the general in June.

Vast experience
Dunford has been on active duty for more than 40 years. A native of Boston, Dunford received his commission after graduating from St. Michael’s College in Winooski, Vt. He commanded at every level from platoon to Marine expeditionary force. He served as the commander of the International Security Assistance Force in Kabul before being named commandant of the Marine Corps — the job he held prior to his present position.

Legislation allows for the chairman to serve up to six years in the position, but tradition is generally to serve four years.

Dunford succeeded Army Gen. Martin Dempsey as chairman. In his time as chairman, he has promulgated a new National Military Strategy, worked with the strategy to defeat the Islamic State of Iraq and Syria, helped formulate the South Asian strategy and established ways to lessen the chance of miscalculations between Russian and U.S. forces. He has also worked to better military-to-military relations with nations across the globe to include China, Jordan, Saudi Arabia and Colombia.