Army leaders helped the U.S. Mint unveil a World War I commemorative coin on Oct. 9 that will partially fund a national memorial honoring the 4.7 million U.S. veterans who served in that conflict.

The coin will actually be issued early next year, but its design was revealed at the Association of the U.S. Army Annual Meeting and Exposition by Acting Secretary of the Army Ryan McCarthy and Army Chief of Staff Gen. Mark Milley.

“No war should be forgotten,” McCarthy said, referring to the fact that World War I is the only major American conflict this past century which has no national memorial in the nation’s capital. “No military member’s service should be forgotten.”

Proceeds from the commemorative coin will help fund a WWI national memorial in Pershing Park, in Washington, D.C., along Pennsylvania Avenue and 14th Street, just over a block from the White House. Ground is scheduled to be broken for the memorial Nov. 9.

The design of the coin features a charging WWI “doughboy” on the front with weapon in hand and barbed wire across the bottom. The back of the coin depicts barbed wire behind a field of poppies.

“Poppies in the wire” was designed to remember the sacrifices of WWI veterans, said J.B. Johnson, director of corporate communications for the U.S. Mint. He was at AUSA to help unveil the coin design, along with Terry Hamby, chairman of the U.S. World War I Centennial Commission.

Sale of the commemorative coin “will be the first step” in memorializing the millions who fought, Hamby said. Proceeds from the coin and accompanying five-piece set of medals will not only fund the memorial, but also outreach and education about WWI conducted by the centennial commission.

The coin will be a commemorative silver dollar, but the metals used to mint it will be worth much more, officials said. 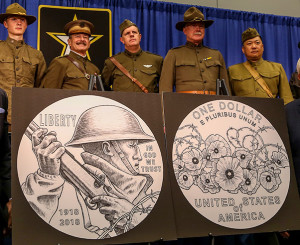 World War I re-enactors stand behind the U.S. Mint’s design for a commemorative silver dollar that will be released early next year. The actor second from the left depicts Gen. “Blackjack” Pershing, commander of the U.S. Expeditionary Force. The coin design was unveiled Oct. 9, 2017 at the Association of the U.S. Army Annual Meeting and Exposition.

A competition helped determine the new coin’s design, with artist Leroy Transfield winning the contest. He didn’t design the coin alone, however. The U.S. Army Center of Military History ensured that the artist accurately depicted the WWI uniform and equipment of the day. Dr. Glenn Williams and Dr. Erik Villard of CMH advised the mint about appropriate images on the coin and on the accompanying set of medals.

The team wanted strong elements that would be recognized immediately as World War I and could not be mistaken for any other conflict, Villard said.

“That’s where you want things like the distinctive helmet that the doughboys wore with the wide brim,” Villard said, “or the Springfield rifle … or putties around their legs or things like that which are so iconic for World War I Soldiers.”

The CMH also provided the mint with photographs of combat action from World War I “that we thought [were] representative,” Williams said.

“The Soldiers of 100 years ago represent the Soldiers who serve today,” McCarthy said. “They left a legacy that touches us all every day.”