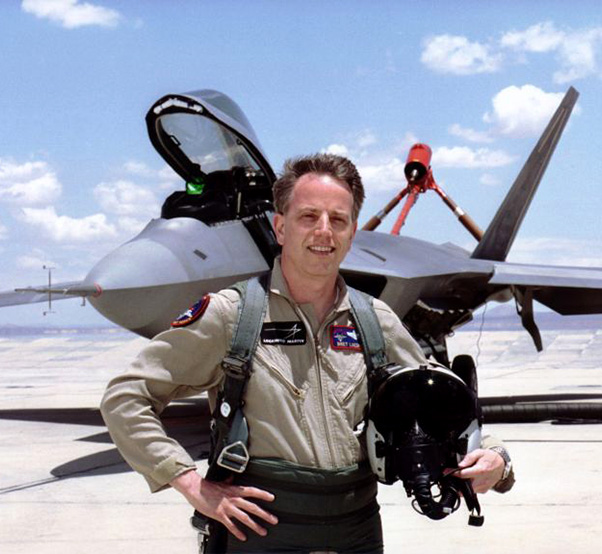 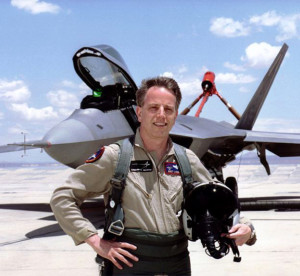 Bret Luedke is a 1980 graduate of the U.S. Air Force Academy and the USAF Test Pilot School Class 88B.

After graduation from the Test Pilot School, Bret flew flight test in the F-16 at Edwards Air Force Base for several years before being assigned to the school as an instructor pilot in the High Angle-of-Attack, Spin and Departure flight training portion of the curriculum.

Luedke separated from the Air Force in December of 1992 and was hired by Lockheed Martin in June of 1993 as an Experimental Test Pilot. He worked a number of different programs for Lockheed Martin, but in 1995 transitioned full-time to the F-22 program working with Paul Metz in Marietta, Ga. He continued to work the F-22 program for the next 17 years through the delivery of the last Raptor, 4195, to the U.S. Air Force.

Early on Luedke was involved in the Pilot Vehicle Interface design of the flight test and production aircraft. He performed some of the initial ground Auxiliary Power Unit, and Pratt and Whitney F-119 engine runs on aircraft 4001 in preparation for its first flight. He was the Lockheed Martin tower “Air Boss” coordinating the various flight and ground agencies for Paul Metz’s first flight in 4001.

As the focus of the flight test program moved out to Edwards, Luedke alternated his time between Edwards and Marietta where he continued to provide support to the flight line as 4002 and 4003 moved through ground testing prior to their first flights.

Luedke’s first flight was in aircraft 4002 at Edwards in June 2000. Despite being in the Mojave Desert, he managed to find the only rain within 100 miles of Edwards and take the highly instrumented aircraft through it … a definite “no no.” Fortunately, none of the instrumentation “melted” from the brief dousing.

Luedke was assigned as the project pilot for aircraft 4004, the first F-22 outfitted with initial aircraft avionics. He flew the first flight of 4004 in November 2000. He subsequently moved out to Edwards full-time in spring 2001. He spent the next 2 1/2 years at Edwards taking the F-22 through all of the flight test disciplines (Loads, Flutter, Flying Qualities, Performance, Propulsion, High Angle-of-Attack/Departure Resistance, Weapons and Avionics).

When Paul Metz transitioned from the F-22 program to the F-35 program, Luedke was selected as the chief test pilot for the F-22 program. A “high” (pun intended) of Luedke’s time at Edwards came on Jan. 18, 2002, when he (unintentionally) set the F-22 altitude record in 4003 of 66,800′ MSL during an Environmental Control System test point starting at Mach 2 and 50,000′ MSL. A number of lessons were learned that day both in the air and on the ground.

He and his wife, Ruth, now reside in the “boondocks” of Whitefish, Mont., with their daughter, Heather, who is a freshman at Carleton College in Northfield, Minn.