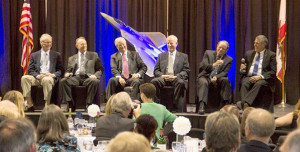 Congressman Steve Knight and Chairwoman, Board of Directors for the Flight Test Historical Foundation, Lisa Gray, present Nicole Panossian the 2017 William J. “Pete” Knight Excellence in Aerospace Scholarship during the Gathering of Eagles event in Lancaster, Calif. Panossian is a junior in Mechanical Engineering at Cal State University, Long Beach Antelope Valley Engineering program and has always had an aptitude for math and science. She enjoys thermodynamics, fluid dynamics and hopes to work in aerospace upon graduation. The C. Gordon Fullerton Memorial Scholarship was presented to Kevin Loudon.

The energy was electrifying Oct. 21 as hundreds gathered at the H.W. Hunter Pavilion at the Antelope Valley Fairgrounds in Lancaster, Calif., to attend this year’s Gathering of Eagles and to celebrate the 20th anniversary of the very first flight of the F-22 Raptor.

Eagle Honoree Paul Metz was Lockheed Martin’s chief test pilot at the time and the guy with the right enough stuff to take the fearsome Raptor soaring high above the clouds over Marietta, Ga., Sept. 7, 1997.

“It was a perfectly executed mission,” Metz told those attending the event. “Raptor really demonstrated its power that day, we got our first taste of what the airplane could do,” he said.

Metz said the accomplishment of the first flight wasn’t his alone. “A team of engineers and aircraft maintainers made that first flight [along with me],” he said. “We all did it together, without all those people contributing it would not have been done,” he said.

Five other Eagle Honorees shared the stage with Metz as they too were inducted as an Eagle Honoree by the Flight Test Historical Foundation. Among their other accomplishments, each were part of “firsts” during F-22 flight testing missions. 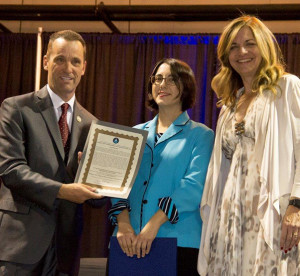 Board of Directors for the Flight Test Historical Foundation, Chairwoman Lisa Gray (right) presents Lisa Brown the Volunteer of the Year award for her outstanding contributions in the development of the curriculum for the online Junior Test Pilot School and on-site, eight week summer program at the Blackbird Airpark in Palmdale Calif., where children learned the fundamentals of flight with hands-on experiments. Guest teachers included test pilots and engineers.

Bret Luedke, a graduate of the U.S. Air Force Academy and the Air Force Test Pilot School. Lockheed Martin hired him in 1993 as an experimental test pilot and by 1995 he was working full-time with Metz on the F-22 Program.

All six pilots were welcomed as an Eagle of the Flight Test Historical Foundation Gathering of Eagles 2017.

Bill Gray served as Master of Ceremonies at the event and paid tribute to previous Eagle Bob Hoover, a World War II fighter pilot and Air Force flight test pilot with a myriad of accomplishments too numerous to list. Hoover passed away last year.

Lisa Gray, chairwoman of the Board of Directors on the FTHF, served as hostess for the evening and introduced speakers.

Pearson wowed the audience with what many said was a powerful message. 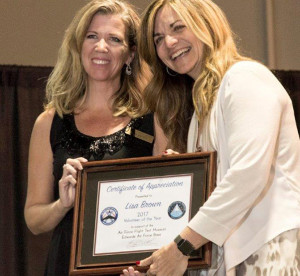 New Eagles- Paul Metz, Steve “Hooter” Rainey, Chuck Killberg, Bret Luedke, Randy Neville and James “JB” Brown were honored as Eagles during the Gathering of Eagles event presented by the Flight Test Historical Foundation. The event celebrated the 20th Anniversary of the First Flight of the F-22 and was a fundraiser to help move the museum off of Edwards Air Force Base.

He talked about the ongoing effort to raise the funds needed to relocate the Air Force Flight Test Museum outside Edwards’ West Gate so that everyone can have the opportunity to see firsthand what the museum has to offer. He thanked the FTHF and the Flight Test Museum for their initiatives over the past 35 years and for their time and dedication so many folks gave to the cause. He offered a special thank you to Lisa Gray for leading the effort for the past several years.

All the hard work and dedication has apparently paid off, as Gray announced that the Foundation expects to break ground for the new museum in the spring of 2018. As that news was met with a round of applause, Bill Gray reminded everyone that although the foundation is a lot closer, they aren’t there yet and they need to continue to raise funds to bring the project to completion. 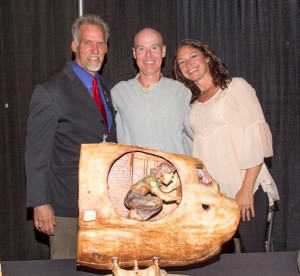 Art Thompson of A2Zfx and Sage Cheshire pose with Julie and Nay Schuder in front of an art piece sculpted by Nay during the Gathering of Eagles event. Thompson designed and crafted the center pieces which were then purchased by aerospace enthusiasts and autographed by the new Eagles. Artists Doug Castleman and Mark Pestana also displayed their aerospace art.

On that note the foundation held an auction lead by auctioneer Shawne Chamberlin that brought in more than $2,000. Chamberlin opened the auction offering a United States flag that flew on the first flight of the F-22. The flag was bought by Congressman Steve Knight. Other items sold ranged from first flight posters signed by test pilot Paul Metz to framed artwork and canvas paintings. Proceeds from the auction went to the Flight Test Historical Foundation.

Danny Bazzell, general manager of the FTHF, thanked those who attended the event and said the foundation is all about raising money to build the museum, “Good news, we’re actually getting there,” he said.

Bazzell, who took over the FTHF reins last November, said his goal is to make it the nation’s largest STEM education center in the Southwest region.

Bazzell said that although they expect to start construction early next year, they still need about $7 million to take the project all the way through.