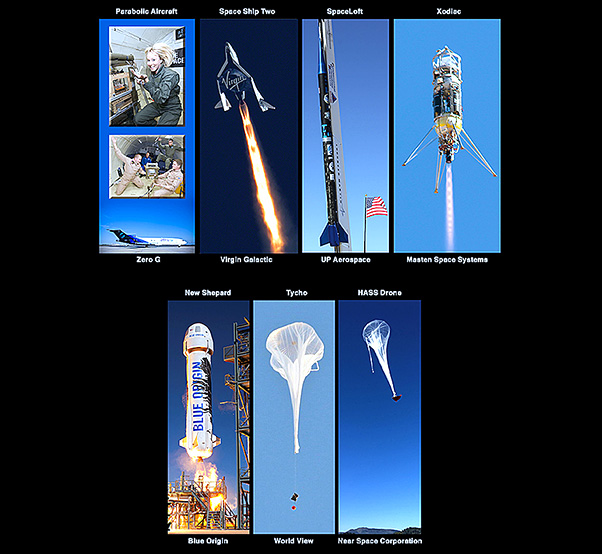 The opportunity to fly on these vehicles helps advance technologies closer to practical use by taking them from a laboratory environment to a real-world environment.

The selections were made by NASA’s Flight Opportunities program, which conducts a competition approximately twice per year for funding to fly payloads using flight providers selected by the proposers. These space technologies are being tested using relatively low-cost flights that simulate spaceflight or just reach the “edge” of space.

“The Flight Opportunities program is a great resource for technology developers to be able to test their ideas in the space environment,” said Stephan Ord, the program technology manager for NASA’s Flight Opportunities program. “Suborbital flight costs are relatively cheap compared to orbital costs, so often researchers will be able to discover potential problems with their hardware prior to investing in a full orbital flight.”

Two topics were included in this call for research. Under the first topic, which requested demonstration of space technology payloads, NASA selected seven proposals:

* LISA-T Microgravity Deployment Demonstration. Greg Laue, principal investigator, ManTech International Corporation, Huntsville, Ala. This experiment is a thin-film solar array and antenna that is deployed from an extremely compact volume and is very lightweight. It will greatly increase the ability to generate power in small satellites such as CubeSats, advancing their capabilities. Flight provider: Zero-G Corp.

Under the second topic, demonstration of vehicle capability enhancements and onboard research facilities for payload accommodation, NASA selected two proposals:

* JANUS 3.0: Enabling Game Changing External Environment Payload Accommodation on Suborbital Reusable Launch Vehicles. H. Todd Smith, principal investigator, Johns Hopkins University, Laurel, Md.. This is a platform mounted on the Blue Origin New Shepard rocket which holds small payloads and exposes them to the space environment. It will allow payloads to perform testing and sampling in the atmosphere at an altitude of 49.6-62 miles (80-100 kilometers), a capability that is not currently available. Flight provider: Blue Origin

* Stratospheric and Suborbital Flight Experiments and Equipment. Elizabeth Kennick, principal investigator, Teachers In Space, Inc., N.Y. The proposer has developed a standardized 3-D printed housing fitted with a customizable processor, data storage, sensors and batteries for flying payloads. This accommodation could provide a future platform for teachers and students to test their experiments in space. Flight provider: Blue Origin

Awards will be made for payload integration and flight costs, as well as limited payload development costs. These investments take technologies from the laboratory to a relevant flight environment, facilitate technology maturation, validate feasibility and reduce technical risks and enable infusion of key space technologies into multiple future space missions.

The Flight Opportunities program is funded by NASA’s Space Technology Mission Directorate in Washington and managed at NASA’s Armstrong Flight Research Center in Edwards, Calif. NASA’s Ames Research Center in California’s Silicon Valley, manages the solicitation and selection of technologies to be tested and demonstrated on commercial flight vehicles.