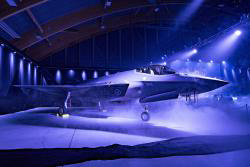 “We mark the start of a new era for the Norwegian Armed Forces,” said Norway’s Minister of Defence Frank Bakke-Jensen. “The new combat aircraft will be a key factor in deterring any attack on Norway, as well as ensuring that we meet our obligations to the NATO alliance. The F-35 remains crucial to the continued modernization of our Armed Forces and our ability to preserve Norwegian and allied security and interests.”

Norway’s three F-35A aircraft departed from Lockheed Martin’s Fort Worth, Texas facility on Nov. 3, 2017, and landed on Norwegian soil that same day at Ørland Air Base. Norway has taken delivery of 10 F-35s to date, three of which are now at Ørland Air Base and seven are stationed at Luke Air Force Base, Arizona, where Norwegian pilots are conducting training. Norway has plans to purchase up to 52 F-35 aircraft.

“Receiving the first F-35s at Ørland is a major milestone for Norway: it’s visible proof of Norway’s commitment to the F-35 Program and Norway continues to be one of the strongest partners of the F-35 enterprise,” said Vice Admiral Mat Winter, F-35 Program Executive Officer. “We are really proud to be part of the opportunity to celebrate this exciting time with Norway.”

Norway industry plays a key role in the development and production of the F-35. More than a dozen Norwegian companies are helping deliver the F-35, from manufacturing parts to providing services across the program. The Norwegian government also pioneered the requirement for a drag chute system for operations on short and icy runways, which will be tested at Eielson Air Force Base in Alaska this winter.

“The cutting-edge technologies and teamwork of our industry partners here in Norway and around the world have made the F-35 an unequaled technological force,” said Marillyn Hewson, Chairman, President and Chief Executive Officer of Lockheed Martin Corporation. “With its range, speed, flexibility, and integrated-defense capabilities, the arrival of the F-35 in Norway will strengthen all of the Norwegian Armed Forces.”

The F-35 provides a transformational solution for Norway’s sovereign defense and will serve as a critical element of the Royal Norwegian Air Force for decades to come. A 5th Generation fighter jet, the F-35 combines advanced stealth with fighter speed and agility, fully fused sensor information, network-enabled operations and advanced sustainability.