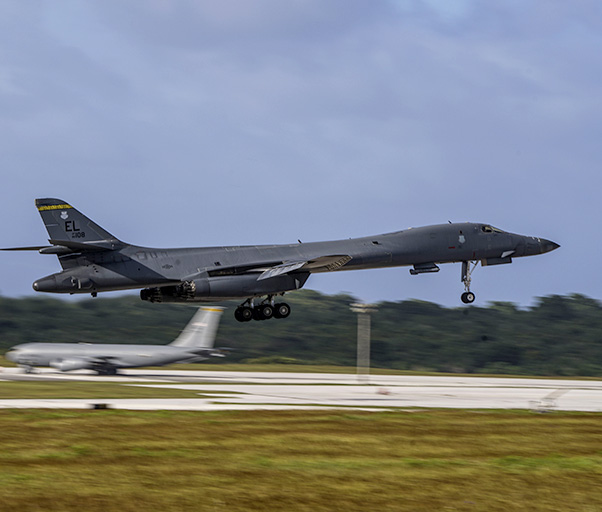 The bombers and approximately 70 U.S. Air Force Airmen flew to RAAF Base Amberley in late November to train and fly with their Australian counterparts as part of the Enhanced Air Cooperation initiative operated by U.S. Pacific Command (PACOM) and supported by the United States and Australia.

Highlights from this fifth iteration of EAC included: an RAAF KC-30A aerial refuel of the B-1B; supporting the RAAF’s Lightning Focus exercise; and establishing an aviator information exchange program that will allow for training between the two air forces to continue on at RAAF Base Amberley and elsewhere in Australia.

“Our countries have been flying and training together for a very long time,” said Lt. Col. Mark Kimball, 37th Expeditionary Bomb Squadron director of operations. “EAC gives us an opportunity to train and operate at the highest ends of the operational spectrum, making our two air forces better and stronger.”

“The B-1B Lancers participating in this exercise were part of the EAC program, which aims to increase interoperability between Australia and the United States,” said RAAF Air Commodore Mike Kitcher, Air Combat Group commander. “Conducting these flying activities is critical to our ongoing regional partnership, and provides specific currency and qualification training for our aircrew.”

With their training mission complete in Australia, the B-1Bs returned to Guam where they are based as part of the long running CBP program.

The employment of CBP missions in the PACOM area of responsibility (AOR), conducted since March 2004, are in accordance with international law and are vital to the principles that are the foundation of the rules-based global operating system.