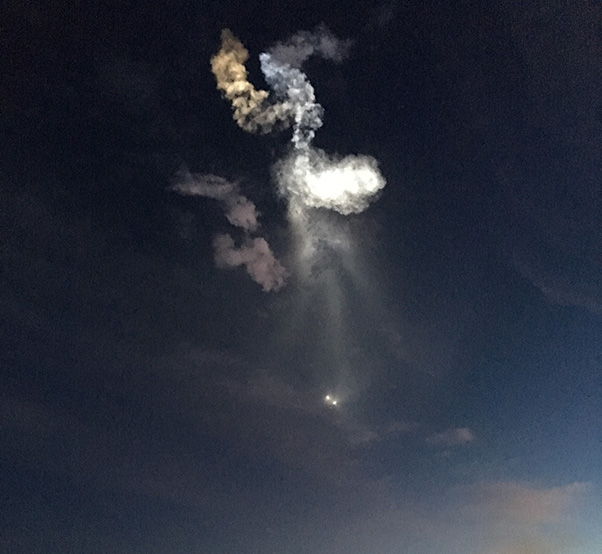 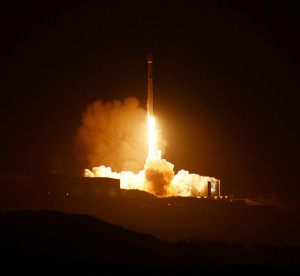 An early evening liftoff of a Falcon 9 rocket from Vandenberg Air Force Base, Calif., on Dec. 22 produced a spectacular aerial display that stopped traffic throughout much of Southern California and prompted many UFO sighting reports to emergency services officials and news agencies.

Ordinary citizens and celebrities from Santa Barbara to San Diego took to the phones and social media to express wonder and concern as the rocket headed downrange, shedding its first stage and a nose fairing that protects the payload within Earth’s atmosphere.

Santa Monica resident Frances Tracy-Black was driving on Interstate 10 when she noticed the expanding rocket plume.

“Drivers all around me slowed to a crawl to watch it,” she said, adding that people started pulling over and getting out of their vehicles to watch and film the phenomenon. “It was wild,” she said, “I’ve never seen anything like it!” Another woman reported that her young daughter thought it was Santa Claus.

The reaction promoted both the Ventura County Sheriff’s Department and Los Angeles County Fire Department to issue public statements assuring panicked citizens that there was no cause for alarm. SpaceX CEO Elon Musk didn’t exactly help matters when he posted on Twitter, “It was definitely aliens,” later posting a video of the launch with the caption, “Nuclear alien UFO from North Korea.”

In fact, the glowing vapor trails in the western sky just after sunset heralded the launch and deployment of the fourth set of 10 Iridium NEXT communications satellites. SpaceX launched three earlier sets of satellites for Iridium Communications in January, June and October as part of a $492 million contract. When completed, the constellation will ultimately comprise 81 spacecraft equipped with the Certus next-generation communications platform as well as the Aireon aircraft tracking and surveillance system.

“In an historic first, this system will provide air traffic control organizations and aircraft operators that purchase the service with a real-time, global visibility of ADS-B equipped aircraft,” according to SpaceX.