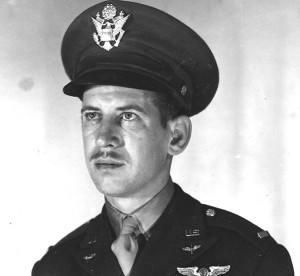 His Jan. 27 funeral with full military honors will mark the formal end of a years-long effort to find and officially identify the DeFuniak Springs native’s remains and bring them back to his hometown.

1st Lt. Sconiers was a 26-year-old bombardier on the B-17 bomber “Johnny Reb II” when it was shot down over France on Oct. 21, 1942. He bailed out and was taken prisoner by the Germans.

Sconiers would spend the next 15 months at Stalag Luft 3, the German POW camp in occupied Poland known to many through the book and movie “The Great Escape.”

At the camp, Sconiers worked security among the POWs during some of the initial tunneling efforts that would lead to the escape of 76 British and American prisoners — 73 would be recaptured — on the night of March 24, 1944.

Sconiers would not be around on the night of the escape, however. In late December 1943, according to family history, he purportedly slipped on ice at the camp and suffered a broken eardrum and possibly a concussion. He was initially treated at the camp hospital, but as complications set in and at the urging of Allied officers, the camp commandant allowed him to be taken to a hospital in Lubin, Poland.

He was buried three days later in a Lubin cemetery, the exact location of which would vex future efforts to identify and recover his remains.

Sconiers’ death declared closed
In 1948, a cursory investigation by the American military’s Graves Registration Service failed to turn up any definitive evidence of any POW remains in the Lubin municipal cemetery. Seven years later, the investigation into the circumstances of Sconiers’ death was declared closed, with American authorities concluding he had been placed in a mass grave.

Family members were not satisfied, and in the 1960s some attempted to get to Poland to search for clues regarding Sconiers’ final resting place. The family made little progress, though, owing to the tensions of the Cold War and the Russian occupation of Poland, according to Pamela Whitelock, Sconiers’ niece and a driving force in the effort to get her uncle back on American soil.

“I thought the story was over,” said Whitelock, who now lives in Ohio.

But the story wasn’t over, due largely to the American military’s commitment to identifying and bringing home its war dead.

In 2006, then-Chief Petty Officer John Gray, assigned to the World War II Working Group of the Defense Prisoner of War/Missing Personnel Office of the Joint Commission Support Directorate, was given the task of tracking down U.S. war fatalities in Poland.

In March 2007, a park in Lubin, which had previously served as a cemetery before it was razed by the Russians, was identified as a potential resting place for Sconiers. That identification was made with the assistance of Lt. Col. Albert P. Clark, who had been at Stalag Luft 3 and had attended Sconiers’ funeral, and the KARTA Center, a Polish organization that works to document the nation’s history.

However, it would be another eight years before the full story of Sconiers’ interment was known.

Ewart’s Army locates grave
In 2015, one of the number of people who was part of the group informally known as “Ewart’s Army,” people interested in determining Sconiers’ final resting place and bringing him home, ran across a photo on the internet showing a grave marker reading “Edouard Sconiers.”

Suspecting that “Edouard” might be a French corruption of Sconiers’ first name, investigators focused their attention on the cemetery in Gdansk, Poland, to which it was traced. As things turned out, the cemetery was for French soldiers, some of whom had been disinterred from the Lubin cemetery before it had been transformed to a park.

According to Gray, Sconiers had been buried in Lubin next to some French soldiers, and because his name sounded French, his remains were also taken by French authorities. 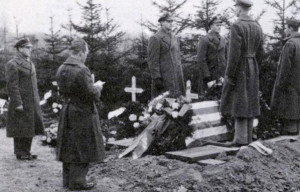 The burial of 1st Lt. Ewart Sconiers’ at the Lubin municipal cemetery on Jan. 27, 1944. On the left is Col. Charles G. Goodrich. Officiating next to him is “Padre Mac”, Murdo Ewen Macdonald (Scottish Chaplain of the 1st Parachute Brigade, captured in North Africa in November 1942). The men standing near the coffin are, from left to right 1st Lt. Milton M. Stenstrom, Col. Delmar T. Spivey, Lt. Col. Albert P. Clark and Maj. Clermont E. Wheeler. All these men were detained at Stalag Luft 3.

“It makes a lot of sense,” Gray said. “He has a French-sounding name. He was buried with French soldiers.”

After some wrangling with the French and Polish governments, the remains were recovered from the grave, and a Polish laboratory tentatively identified them as being Ewart Sconiers.

Today, Sconiers’ remains are back at Offutt awaiting transportation to Pensacola International Airport on Jan. 25 for local ceremonies.

After arrival, Sconiers’ remains will be given a motorcycle escort to DeFuniak Springs by the Patriot Guard riders.

The next day, a parade honoring Sconiers will be held in the city.

Local funeral services
Funeral services are set for 11 a.m. Jan. 27 — 73 years to the day from which he was buried in the Polish cemetery — at Southwide Baptist Church. When he is laid to rest in American soil, Sconiers will become the last POW from Stalag Luft 3 to be identified and returned home.

The funeral service will be open to the public, according to Whitelock.

Even though she has been working to identify and bring her uncle home for years, Whitelock said the discovery of his remains and the upcoming funeral still retain an emotional punch for her.

“`You would think it wouldn’t be overwhelming, but it is,” she said. “Our story really echoes America’s pledge to its service personnel.”

It was that pledge to account for all of America’s missing and dead service personnel that motivated Gray. He’s been retired since 2009, but clearly is moved by the way Sconiers’ story has unfolded.

“It hasn’t really even sunk in yet,” Gray said.

But Sconiers’ story is far from unique among the annals of American efforts to recover troops lost in war, he added.

“Most people are shocked at the work that is going on” to recover American remains, Gray said, “but it goes on every day.”