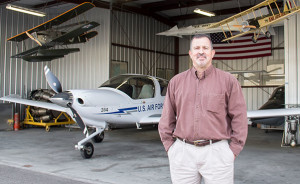 Pilot and author Foster Stanback poses in his hanger in Fullerton, Calif., where he is working with several companies including Build-a-Plane, Build-a-Rocket and Sage Cheshire to promote STEM education.

Not much excites Foster Stanback more than inspiring young kids in STEM education–his passion is infectious.

Building paper airplanes as a young boy, nothing was more fun than lighting them on fire and throwing them off of a roof.

At age 16 Stanback began flying lessons and, at 18, he received his license. Unfortunately, his eyesight kept him from becoming a military pilot; however, he owns and flies a Diamond DA40 single engine, four-seater aircraft that was formerly flown in the U.S. Air Force Academy Powered Flight Program.

“The products of aerospace are the things that get young people excited enough to do the hard work and learn the hard subjects so they will be able to work with those products down the road in their careers,” explained Stanback. “Drones, rockets, satellites — it’s not rocket science, we know that this is what gets kids excited!”

Stanback works with Build-a-Plane and other companies where kids build or restore donated aircraft, learning aerodynamics, engineering, welding and other skills. Upon completion, they fly in that aircraft, inspiring many of them to become pilots, engineers and designers. He is also working with Art Thompson of Sage Cheshire, who is currently developing a program on liquid fueled rockets for Lyn Freeman at Build-a-Rocket, a non-profit organization. They are not talking about a little cardboard rocket kit that goes up a few hundred feet and comes down with a parachute, but rather a 16-foot liquid fueled rocket that goes up thousands of feet.

The kits involve some pretty serious engineering that students will be able to assemble with supervision. “You better believe that when a young kid is exposed to that, they will want to do something that is related to what they’ve just seen and had been a part of – so when they have to take algebra, calculus and physics they will know it is not the end in itself, it is a means to an end.” By doing the hard work and studying, Stanback said students can receive scholarships, internships and great paying jobs upon graduation. Only three percent of college students decide to go into engineering – one of the highest paying career fields available.

An advocate for higher education, Stanback acknowledges that college is not for everyone.

Instead of going to school for four years and creating thousands of dollars in debt, students can also learn a skill at a trade school and make a great living, especially with private companies.

“We have to train a pilot every 15 minutes to meet the projected demand for the airlines,” said Stanback. “We are not anywhere close to that. We need to raise up pilots, mechanics, engineers and aircraft maintenance people. America is behind on education and that is wrong.”

The Apollo Program was responsible for inspiring a whole generation; however, that generation is retiring and not much has happened to inspire the next. Stanback believes America needs to go to Mars and applauds Elon Musk for that vision. “To take a private company and build it from the ground up, building sophisticated launchers that can land on a pad – believe me, a lot of people want to work for SpaceX. That’s exciting. We need a lot more SpaceXs’ and to do that, we have to reach the young people.”