Under a public-private partnership with the agency’s Armstrong Flight Research Center in California, GO developed the GO1-ITA, a mass properties and outer mold line simulator for the GO1 hypersonic flight testbed and earned NASA’s airworthiness approval for flight on NASA’s C-20A.

The C-20A was modified to add a centerline hard point to carry the Uninhabited Aerial Vehicle Synthetic Aperture Radar pod. A campaign of three flight tests was conducted, successfully completing all test objectives including clearing the operational flight envelope of the C-20A with the GO1 pod as well as demonstrating a unique launch maneuver designed for air launch of the GO1 on operational flights starting in 2019. Data collected during the campaign will be used to validate models and inform the ongoing design and development of GO1. 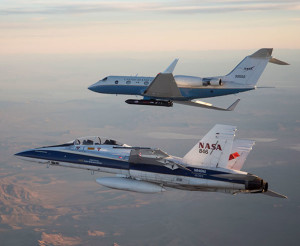 NASA’s C-20A with Generation Orbit’s hypersonic testbed attached is chased by the agency’s F-18 jet for safety and photography.

“I’m immensely proud of our team and what has been achieved in a very short timeframe,” said GO CEO, AJ Piplica. “To go from concept to flight of our company’s first flight hardware on a manned aircraft in under two years shows the talent, belief, and sheer force of will that are the trademark of the culture we’re continuing to build at GO.

He added, “Over the course of this collaboration with NASA, we’ve learned a great deal from working with the NASA Armstrong team, especially through the flight test operation portion of the collaboration. The culmination of this partnership in the successful flight test campaign has demonstrated the value of the NASA’s public-private partnership model for supporting the advancement of novel, commercial aerospace technologies.”

Generation Orbit Launch Services Inc. is working toward offering fast and dedicated space transportation services for small payloads. The air-launch approach was developed by the company to provide flexible launch capabilities and to reduce fixed infrastructure needs, launch costs, and the time from contract signature to launch.

NASA’s C-20A is based at Armstrong’s Building 703 in Palmdale, Calif. The aircraft supports missions under NASA’s Science and Space Technology Mission Directorates.