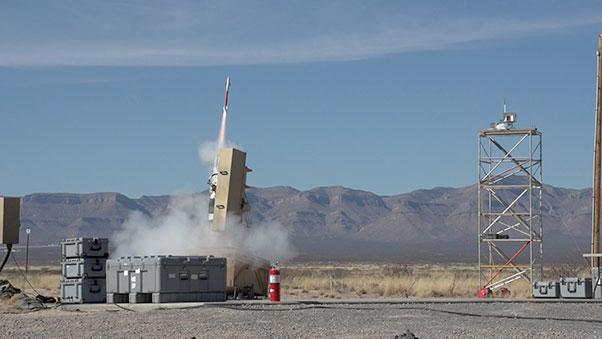 Lockheed Martin’s Miniature Hit-to-Kill missile successfully conducted a controlled flight test to demonstrate the interceptor’s increased agility, and to validate the performance of its airframe and electronics — now common between MHTK’s two configurations to drive affordability.

The Jan. 26 test at White Sands Missile Range, N.M., was the first ever for MHTK’s updated electronics, and the second for the interceptor’s next-generation airframe. Commonality between the two missile configurations (active and semi-active seeker), and the increased agility demonstrate MHTK’s transformational capabilities to defeat rocket, artillery and mortar (RAM) targets with greater accuracy, reliability and range compared to current systems. Funded by Lockheed Martin, the successful test advances the program’s technical maturity level and builds confidence in the interceptor’s ability to defeat current and evolving threats.

“The U.S. Army and international customers have made it clear that today’s global security environment demands agile, close-range solutions that protect warfighters and citizens from enemy rockets, artillery and mortars. The design of the MHTK interceptor enables a highly effective solution in a very compact package,” said Tim Cahill, vice president of Integrated Air and Missile Defense at Lockheed Martin Missiles and Fire Control. “This test is exciting because it is another successful milestone demonstrating the interceptor’s revolutionary capabilities. We look forward to building on this success.”

Shorter than a yardstick, MHTK retains the range and lethality required of a counter-RAM solution. MHTK uses hit-to-kill technology, which destroys threats through an extremely accurate application of kinetic energy in body-to-body contact. Hit-to-kill technology eliminates the incoming threat while reducing the risk of collateral damage seen in traditional blast-fragmentation interceptors.

The MHTK interceptor is less than 2.5 feet (72 cm) in length and weighs about 5 pounds (2.2 kg) at launch. The mini missile has the potential to bring miniaturized capabilities to the warfighter with lower costs and reduced logistic footprints, while opening a world of opportunities for applications of small interceptors.