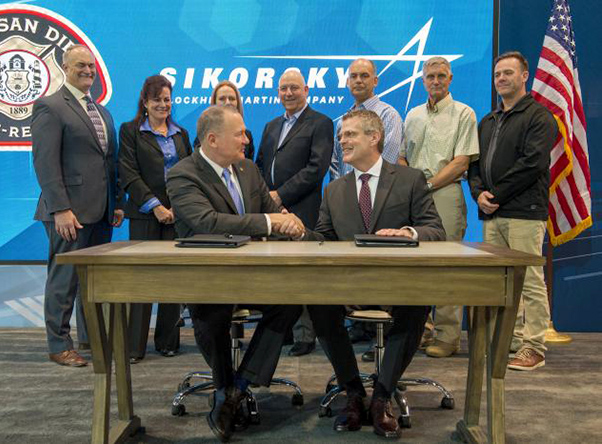 On Feb. 27, Sikorsky, a Lockheed Martin company, signed to deliver one S-70i™ Black Hawk helicopter in a baseline configuration to the city of San Diego at the 2018 Helicopter Association International Heli-Expo in Las Vegas.

Wildland fires have spread more rapidly than ever observed in the past resulting in a year-round fire season in San Diego.  “The Firehawk® configuration of the Black Hawk greatly exceeds San Diego Fire-Rescue Department’s current aerial firefighting capabilities,” said Brian Fennessy, Fire Chief for the City of San Diego. “The FIREHAWK is capable of increased water delivery (1,000 gallons) and enhanced performance (aircrew safety).  The more water rapidly dropped by helicopter vastly improves the odds of extinguishing a fire more quickly and is critical in protecting lives and property in San Diego.”

The S-70i variant of the Firehawk helicopter is an upgrade from the widely used S-70A, and includes wide chord rotor blades for increased payload and maneuverability, enhanced engine power, a stronger airframe, digital cockpit with flight management system for enhanced situational awareness and an Integrated Vehicle Health Management System to monitor the aircraft’s operational health.  Among improved safety features, the S-70i aircraft includes a terrain and obstacle avoidance system that alerts aircrew to the proximity of potential hazards on the ground.

San Diego Fire-Rescue’s Air Operations helicopters respond to more than 400 emergencies and log between 400 and 500 hours of flight per year.  The new Firehawk helicopter will allow increased mobility and response time to fires and other crises.

“Thanks to its proven multi-role platform and military design, the rugged FIREHAWK is able to sustain the physical stress of aerial firefighting.  The Firehawk will also provide the city of San Diego with the ability to safely carry out other life-saving missions,” said Sikorsky President Dan Schultz. “We are thrilled that the City of San Diego has chosen Sikorsky’s Firehawk helicopter.  We welcome the men and women of the San Diego Fire-Rescue Air Operations to the Firehawk family.”

Sikorsky supports the critical mission of the San Diego Fire Department with an all new S-70i Firehawk aircraft. Customers can order aircraft with mission specific kits and accessories customized to specific preferences.