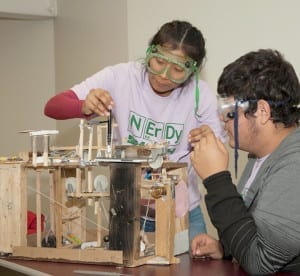 Science Olympiad is a national STEM competition for middle and high school students where they compete in events pertaining to various scientific disciplines, including earth science, biology, chemistry, physics and engineering. Each state hosts regional tournaments and the winners participate in a statewide event. The top 120 teams will advance to the 34th Annual Science Olympiad National Tournament which will be May 18-19 at Colorado State University in Fort Collins, Colo.

“Mister Morgan, my chemistry teacher, inspired and believed in me. He showed me that if I try hard enough for something I have never tried, I could do it — and here I am!” she proudly explained. 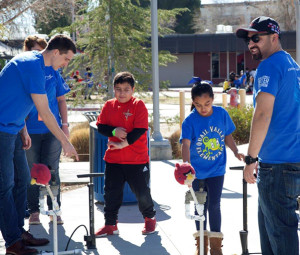 When it came time to demonstrate the Rube Goldberg, her team didn’t do as well as anticipated, however, parents and volunteers reminded them that they were already a winners because they were participating in the event. A few tears were shed and one parent commented that “losing is also a good experience — not everyone goes home with a trophy — that is life.”

“These kids put in 20-plus hours a week, not counting regular school, to work on their projects,” said Monica Lopez, a mom and volunteer for the event. “They are winners even if they don’t win a medal or an award.”

Lopez said she was honored to volunteer with students and even though it is a competition, she said teams help and encourage their competitors. “It’s like a big, close family.”

The teams from the Regional Science Olympiad tournament held at Antelope Valley College that advance to the State Finals are:

The teams advancing to the National Finals will be determined at the State Finals that will be held at Caltech April 7.