From bombers to bangled cuffs, the 46th Annual Antelope Valley Board of Trade Business Outlook Conference had a little something for everyone. Held at the Antelope Valley Fairgrounds, the themed conference, “Small Business, Big Results” had a new layout with more time to network and visit with vendors.

House Majority Leader, Rep. Kevin McCarthy, R-Bakersfield, opened the conference stating that a tax overhaul bill with reforms has prompted corporations with operations overseas to consider bringing those operations back to the United States and for every new regulation, two must be removed. He also said that Congress will continue to invest in the national defense and our veterans.

One change that pleased many in the audience was that the GI Bill for education will no longer have a 15 year “use or lose” limit.” McCarthy also said that Washington is very informed of what is happening in the Antelope Valley. “Vice President Pence has already been here, he stopped off at Mojave, looking at what the future holds here,” said McCarthy. He added that he will continue to bring Washington to the Valley so they can see who is defending the nation and also to show them the cutting edge in innovation and education.

Richard J. Simmons, a partner at Los Angeles law firm Sheppard, Mullin, Richter & Hampton, LLP, gave a presentation on California labor laws which highlighted some of the many challenges faced by those seeking to do business in California.

“In some states we have wrongs without a remedy, in California we have remedies without a wrong,” said Simmons, a refreshing, non-politically correct speaker. “We have a legislature that actually sits down and hallucinates new rules that it can then impose upon employers and you’re forced to sort it out under the pain of potential litigation and punishment that can go on for years.” 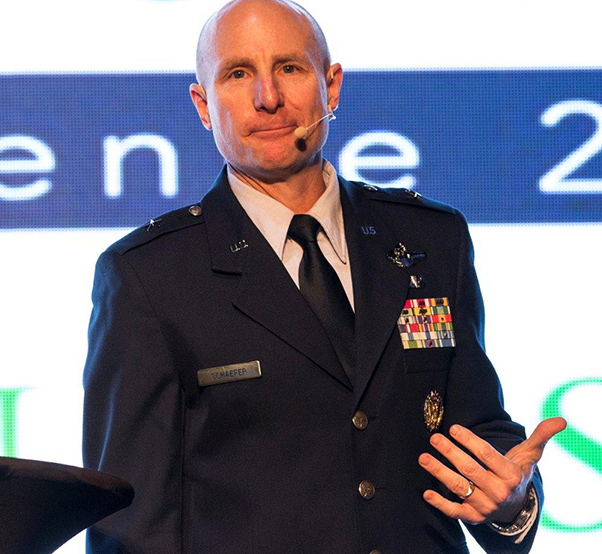 Brig Gen. Carl Schaefer, 412th Test Wing Commander at Edwards Air Force Base, shares his personal leadership philosophy during the 46th Annual Antelope Valley Board of Trade Business Outlook Conference. As a leader, Schaefer has identified four “non-negotiable” offenses that he believes should result in employee termination: Dishonesty, ruling through terror, lack of emotional control and abuse of office.

Simmons spoke of the potential downside of “ban-the-box-rules” that went into effect Jan. 1, 2018, which prohibit employers from inquiring about an applicant’s criminal history until after an offer of employment has been made. Discussing other legislation creating rules that businesses may find costly and time-consuming, he referred to AB 1556, which aims to eliminate gender pronouns. “It cost the city of Los Angeles $30,000 to change their badges from ‘fireman’ to ‘firefighter’ — do you know how much it will cost to change all of the “man-holes” in California?” Simmons joked. “It is truly a scary time.” He encourage all business to review the new laws as soon as possible.

Congressman Steve Knight, R-Calif., also addressed the gathering, as he has for the last several years. He said that even though Washington was unable to pass a budget on time, they were able to secure a two-year DOD budget of $700 billion dollars for this year and $716 billion for 2019.

“We are getting what our military needs,” said Knight, including more cockpit time for pilots and more equipment and training for soldiers. He is also continuing to work for more financing toward X-Plane programs. “X-Planes get us to the next stage, they get us to the next technology and that is what we are going to be pushing for.”

Knight said he continuously brags about the Antelope Valley. With great people, parks, events and opportunities for higher education, he is proud to call the Antelope Valley his home. He said local schools are winning academic and athletic awards almost daily.

Knight presented the Navigating Change Award to Antelope Valley Union High School District Superintendent Dr. David Vierra, for his consistent advocacy for excellence in education. Being a part of the Valley’s education community for 34 years, Vierra served 16 years as Superintendent. Vierra accepted the award on behalf of the 2,300 educators in the Valley and believes that with the proper support, all students can achieve their goals. 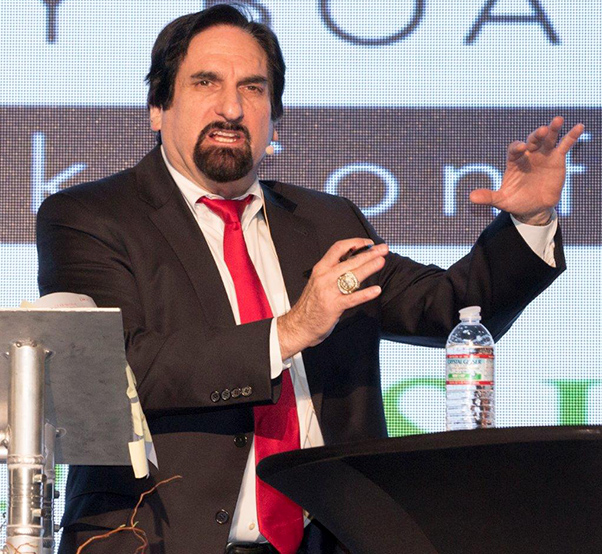 Brig Gen. Carl Schaefer, 412th Test Wing Commander at Edwards Air Force Base, thanked “Aerospace Valley” for their continued support of those serving at Edwards. “I’m not from here but I’ve spent more time here than anywhere else,” said Schaefer, adding that his family considers the Antelope Valley home. Showing a 70 second video of 70 years of the Air Force evolving, Schaefer said the military must continue to develop. “We have a national imperative right now to continue to modernize. Our adversaries have caught up on technology in a lot of areas and we cannot allow that to happen.”

Responsible for almost 8,000 personnel, Schaefer shared his priorities and beliefs about himself personally and what he expects out of his employees. Personally they are: faith, family, Air Force and mission. “I always let my family know that when the Air Force is no longer fun, they have a vote in that — fortunately, my family has been on board and we have been able to serve for 28 years.” He said that sharing his personal priorities lets people know where he is coming from and it also helps people hold him accountable. His professional priorities include: mission, Airmen and their families. “We recruit Airmen, but we retain families. I want to hold onto them for 30 years.” He said he treats all employees the same, from his vice commander to the person who cleans his office. “They are all of equal value, I cannot get my mission done without every single one of them. There is no difference in how I treat them.” He also lets his people know that if they are not enjoying themselves, perhaps it is time to leave the Air Force. 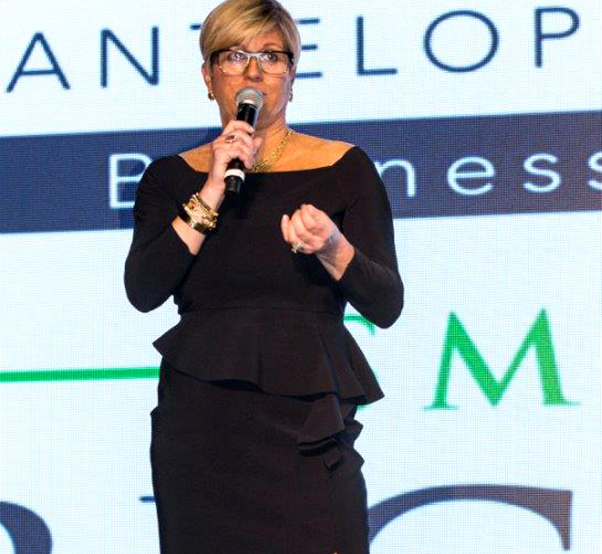 Jill Donovan, creator of Rustic Cuffs, shared how to turn pain into success during the 46th Annual Antelope Valley Board of Trade Business Outlook Conference.

Making official something that many in the Antelope Valley and Edwards Air Force Base communities have been hoping to hear, Schaefer said, “I would like to publically announce that the B-21 will be tested at Edwards Air Force Base. Edwards has been the home of bomber tests and now we can also release that (the B-21) will be tested here in the near future.” While staffing at Palmdale’s Air Force Plant 42 continues on a steady, upward trajectory, the location of the bomber’s assembly has yet to be officially released.

Keynote speaker Robert Massi was forced to cancel his appearance due to illness, leaving author and jewelry designer Dr. Jill Donovan of Rustic Cuffs to wrap up the event.

Donovan had a dream of becoming an Olympic gymnast and was crushed when her coach told her at age 10 she simply would never become an Olympian.

From that day forward, she decided she would learn one new hobby a year, which included violin, harmonica, painting and figure skating. She became a lawyer and a professor of law. Happily married with two daughters, she felt her life was still lacking. A guest appearance on Oprah Winfrey’s popular afternoon talk show, in which she shared her humorous story of how she learned to “re-gift” from her mother, sparked much debate about the practice and laid groundwork in her life for the eventual launch of her successful business, Rustic Cuffs. “Never give up!” summed up Donovan. She now has 165 employees making bracelets and cuffs, a fabulous sense of humor, a weekly radio spot and is blessed beyond measure. 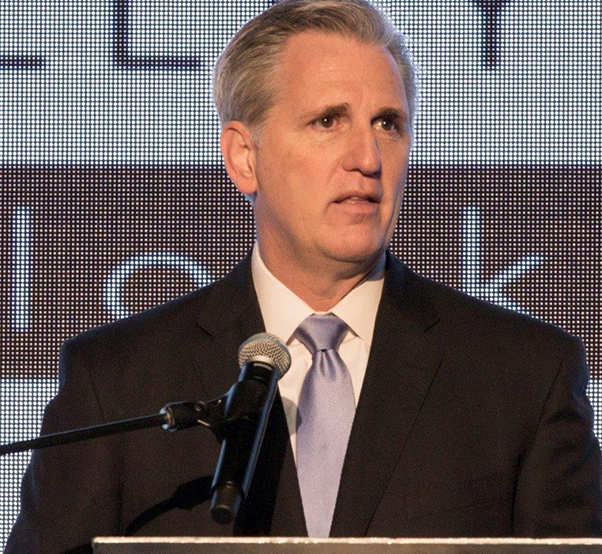 House Majority Leader, Rep. Kevin McCarthy, R-Bakersfield, opened the conference stating that a tax overhaul bill with reforms has prompted corporations with operations overseas to consider coming back to the United States and for every new regulation, two must be removed. 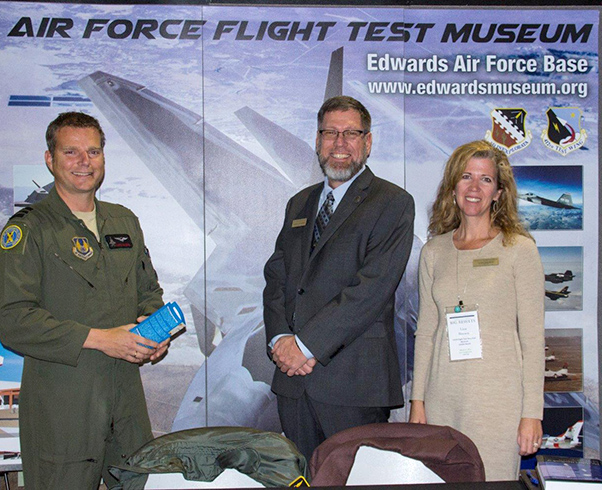 One of the many vendors at the 46th Annual Antelope Valley Board of Trade Business Outlook Conference was the Flight Test Historical Foundation. Sharing the rich aviation history of the Valley were Maj. Martin Van de Pol, an F-35 Flight Test Engineer and pilot of the Royal Netherlands Air Force; FTHF General Manager, Danny Bazzell and Lisa Brown, creator of the on-line Jr. Test Pilot Program. 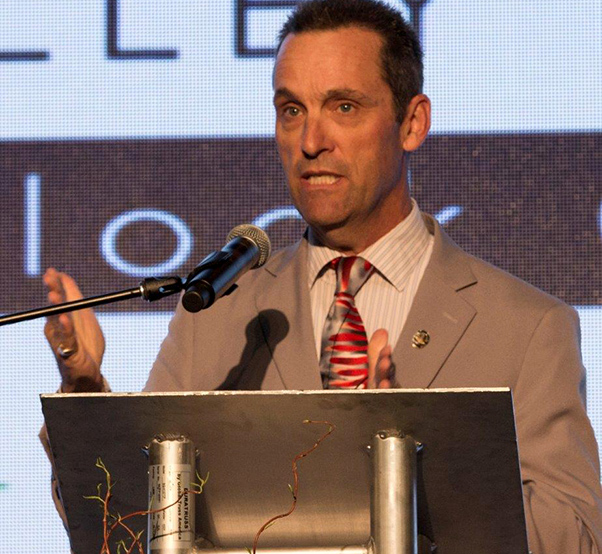