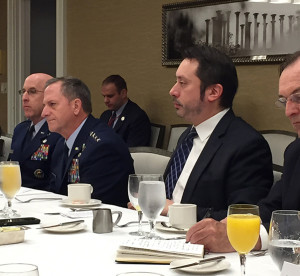 But there is a cost to the readiness at bases on the point of the spear and the bases in the United States are paying it, Goldfein said.

Cost of maintaining readiness
“When you walk those bases and you see lower levels of readiness, lower levels of manpower, higher levels of operational tempo as they not only prepare for a continual rotational to the Middle East — because that footprint hasn’t come down — but also ensure we have continued bomber presence, to ensure we have what’s required to support the pressure campaign and we’re doing that with less people, less parts on the shelves, less flying hours, you will find the morale there is not high,” he said.

Conventional airpower and people paid the bills for more intelligence, surveillance and reconnaissance assets, the general said. They paid for the continual bomber presence. They paid for space assets. And people left the service, but that didn’t mean the number of missions declined. Those who remained had to pick up the slack.

The fiscal year 2018 DoD budget goes a long way toward addressing the problem, Goldfein said. The first thing the service must invest in is its people, the general said.

“It’s more than just those who strap on the aircraft,” he said. “It’s the maintainers, it’s the refuelers, it’s the avionics technicians; it’s all those folks who have their fingerprints on the airplane before it takes off.”

Adding more Airmen
Getting that number right will go a long way to improving readiness and morale, the general said. The Air Force will add 4,700 more airmen this year and 3,300 a year into the future.

The Air Force also must have a healthy number of weapon systems that it can generate, employ and sustain at combat rates, the general said. This means the depots need an infusion of money and people. Parts inventories must be increased.

“It’s the flying hour program and all those things that sustain a healthy weapon system,” he said.

There also needs to be an operational training environment that allows airmen to realistically train for higher-end combat, Goldfein said.

“We’re doing a lot of work now in looking at if China and Russia … are our pacing threats that we have to train against, what exactly does that mean to answer the question, ‘Ready for what?’” the general said.

Training now must reach into space and into the digital realm, he said.

And, the Air Force must have the time required to invest in the training, Goldfein said.