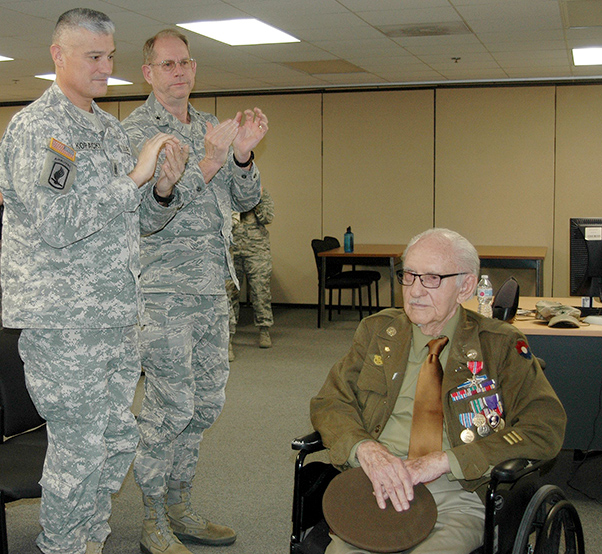 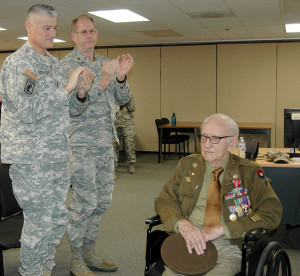 More than seven decades after participating in some of the most harrowing battles of World War II, William Grant Jr.’s heroic and meritorious Army service was recognized with his receipt of the Bronze Star Medal recently in Las Vegas.

More than 100 people, including the majority of Grant Jr.’s extended family and the local Las Vegas Veterans of Foreign Wars Post attended the event. Grant Jr. had only learned of the imminent ceremony on Wednesday.

No one in attendance harbored any grudges toward the Department of the Army for the delayed receipt of the medal by Grant, who attained the rank of private first class by the time of his discharge. Grant was awarded the Bronze Star following the war’s conclusion, but he never realized he had received it until his son, William Grant III, of Los Angeles, reviewed his father’s discharge papers before a visit to the Veterans Administration health care system about four years ago.

The Bronze Star is a decoration for U.S. service members who have recorded heroic and meritorious achievements in a combat zone while engaged in actions against an enemy of the United States.

Grant Jr. is also a Purple Heart and Combat Infantry Badge recipient; he had received those awards prior to Friday’s Bronze Star ceremony.

“I never really thought about it,” said Grant Jr., a Pennsylvania native who enlisted in the Army at age 17 at the height of World War II. “Pomp and circumstance aside, I appreciate the award. I realize these medals don’t come cheaply.

“I want everyone to realize: War is still hell.”

Grant Jr. landed in Normandy, France, within one week of the initial Allied landing on the French coast. Over the course of the next 27 months, Grant Jr. participated in five major battles. Although the citation for his original Bronze Star cannot be located, Grant Jr. believes he received the medal for his efforts in the Battle of the Falaise Pocket in France in 1944. During that battle, Allied forces encircled three German divisions in Normandy.

“Out of my company, nine enlisted Soldiers and two officers were the only ones to survive,” Grant Jr. said. “Officers were dropping like flies. You might have five Soldiers in your squad one moment and it would be down to two by the end of the day.”

Despite the horrific battles, Grant spoke proudly of his military service, saying his 27 months in the Army were the defining moments of his life. His last job in the Army was regimental mailman.

“That period of time was the most productive time of my life,” Grant Jr. said. “After experiencing combat, you realize that–for the rest of your life–no emergency is too great or any event is too bad to overcome.”

After his decorated military service, Grant Jr. returned to civilian life and continued his public service working for the Social Security Administration. He moved from the East Coast to southern Nevada about nine years ago to escape the snow and move closer to immediate family.

Grant Jr. said he feels “appropriate for someone my age” and maintains his own residence. He said the seven decade delay for the reception of his Bronze Star was not upsetting and he even used a military acronym to describe the situation.

“There are no lingering bad feelings,” Grant Jr. said. “There will always be some ‘snafus’ in a large organization like the Army.”