The Antelope Valley hosted its inaugural FIRST Robotics Competition April 6-7, in the gymnasium of Eastside High School in Lancaster, Calif.

The two-day competition kicked off with greetings from David McBride, director of NASA’s Armstrong Flight Research Center at Edwards, Calif. 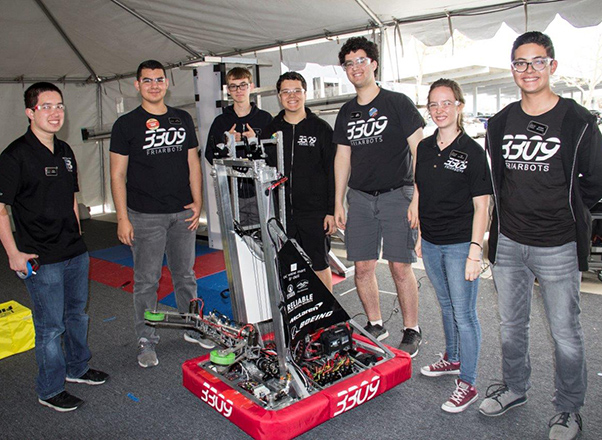 Members of FIRST robotics competition the Friarbots from Anaheim pose with their creation before competing at the inaugural FIRST Robotics Competition in the gymnasium of Eastside High School in Lancaster. Liz Metzger said that she was always interested in the medical field and after working in robotics she is now interested in Bio Medical and building engineering for prosthesis.

McBride oversees all aspects of management, strategy and operations at NASA Armstrong and said promoting the competition is important to NASA because the next generation will help answer a few simple questions such as, “Are we alone in the universe?” “How do planets form?” “How do you build quiet supersonic aircraft?” McBride said NASA is trying to understand the dynamics of the earth. “To get that done, we need your help,” he told hundreds of guests.

Cynthia Cregier said she has been volunteering in robotics for five years and started the Quartz Hill team in her son’s school so he could participate in an event close to home.

“There is so much emphasis on sports. Robotics is inclusive and just a real good environment for learning and growing. There is a spot for everyone,” she said.
For more information on FIRST, visit www.firstinspires.org.