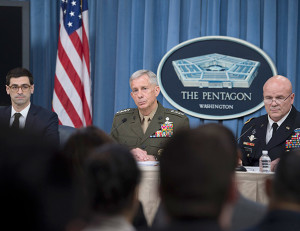 From left, Assistant Secretary of Defense for International Security Affairs Robert S. Karem; Marine Corps Gen. Thomas D. Waldhauser, commander of U.S. Africa Command; and Army Maj. Gen. Roger L. Cloutier Jr., Africom’s chief of staff and the investigating officer for the Army Regulation 15-6 investigation into the Oct. 4, 2017, attack in Niger, brief the Pentagon press corps on the results of the investigation, May 10, 2018.

American special operations forces fought valiantly against overwhelming odds in the battle against Islamic State of Iraq and Syria terrorists outside Tongo Tongo, Niger, and while a number of factors contributed to the clash, no single factor within the control of U.S. forces caused the deaths of four U.S. Army soldiers and four Nigerians, a military investigation has concluded.

The study cut through the miasma of innuendo and rumor that has surrounded the incident in which the American Special Forces soldiers accompanied a Nigerien unit on a partnered mission, Defense Department officials said.

Tactical surprise
The report stressed that the immediate cause of the deaths of the U.S. soldiers was tactical surprise by a far larger enemy force. All four were killed taking the fight to the enemy, and none was ever captured. The soldiers faced small arms fire, rocket-propelled grenades, machine guns and mortars.

Support from French aircraft and a Nigerien quick-reaction force was prompt, and the French aviation effort, specifically, “likely saved the lives of the surviving members” of the U.S. Special Operations Force team,” according to the investigation summary.

The American soldiers called for air support 53 minutes after the action started. The French aircraft arrived over the battlefield 47 minutes after that notification. The Mirage jets were not able to drop ordnance due to the confusion on the ground, but low-level passes over the fight caused the ISIS terrorists to break action and retreat. French helicopters arrived later and evacuated the surviving U.S. soldiers. 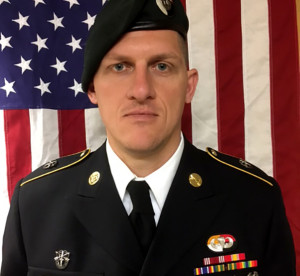 The Nigerien army’s quick-reaction force left its base eight minutes after being notified and arrived in Tongo Tongo about four and a half hours later due to the lack of roads and rough terrain in the area, according to the report.

Contributing deficiencies
There were deficiencies that contributed to the result, the report says, noting that personnel turnover in the U.S. unit prevented the team from conducting “key pre-deployment collective training as a complete team.”

Further, the report found the team did not conduct pre-mission rehearsals or battle drills with their Nigerien partner force.

Another departure from norms was that the initial concept of operations for the mission was not approved at the proper level of command, according to the summary. “Rather the U.S. Special Operations Force Team commander and the next higher level commander at the Advanced Operations Base … inaccurately characterized the nature of the mission in the concept of operations,” the report says. That commander was under the mistaken belief that he could approve the mission, when it really required approval at the next higher level.

The defense secretary is addressing the institutional and organization issues the report unveiled. “He has directed a number of specific actions to examine, evaluate and make recommendations of DOD personnel practices to improve units’ readiness and lethality,” chief Pentagon spokesperson Dana W. White said in a written statement. 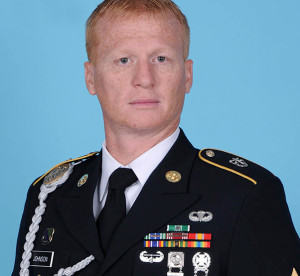 Mattis also has directed U.S. Special Operations Command to review training, operating procedures, operational-level planning and other relevant factors, and he has directed the undersecretary of defense for personnel and readiness to review DOD policies that adversely affect units’ cohesion and lethality.

All those involved have 120 days to report back with their findings.

The incident in Niger on Oct. 4, 2017, that resulted in the deaths of four U.S. soldiers and wounding of two more have resulted in changes and adjustments to how U.S. forces are employed in Africa, the commander of U.S. Africa Command said in Washington, D.C., May 10.

Marine Corps Gen. Thomas D. Waldhauser briefed the Pentagon press corps on the incident and spoke specifically about how the lessons learned have led to changes throughout the command. “I will ensure that lessons learned [from the incident] are communicated to all levels within Africom as well as within the component commands, and integrate these changes into our daily operational activities,” the general said.

Army Maj. Gen. Roger L. Cloutier, Africom’s chief of staff and the investigating officer, and Robert S. Karem, the assistant secretary of defense for international security affairs, also spoke about the incident and the subsequent investigation, known as a 15-6 for the Army regulation that governs such incident reviews.

The process is designed to gain understanding of what happened via interviews with all available witnesses, imagery, reports, physical presence at the scene of the events and much more. Each service and the Defense Department has a similar process to get at the truth and to make recommendations. 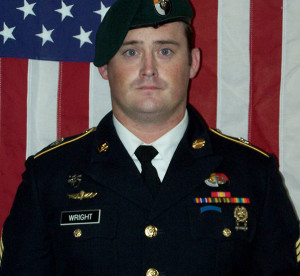 Risk mitigation, improved readiness
Waldhauser noted that the command did not wait until the 15-6 investigation was concluded to make changes. Soon after the incident he made changes to mitigate risk and improve readiness for American forces in Africa.

Some examples include requiring U.S. service members operating in Africom to understand the intent and guiding principles of the strategic approach when working with allies and partners. “The fundamental principles of this framework are critical to an enabling approach to security assistance,” the general said.

Waldhauser has directed additions to the minimal equipment requirements for the special operations teams that work for Special Operations Command Africa to ensure those forces maintain an improved security posture. “This includes increased firepower for force protection,” he said.

The general also directed adjustments to the mobility requirements to provide teams additional options for vehicle movement based on terrain, traffic and mission.

This should clear up confusion surrounding approval authorities and oversight by the Special Operations Command Africa leaders, the general said. 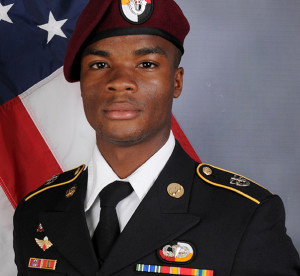 Sgt. La David Johnson, 25, a native of Miami Gardens, Fla., enlisted in the Army in January 2014 as a Wheeled Vehicle Mechanic (91B). His awards and decorations include the Army Achievement Medal, the Army Good Conduct Medal, the Global War on Terrorism Medal, the Army Service Ribbon, the Army Parachutist Badge, the Army Air Assault Badge, the Driver and Mechanic Badge, and the Marksmanship Qualification Badge — Sharpshooter with Rifle.

The 15-6 investigation into the October incident led to changes in other areas, such as pre-deployment training, force generation, unit transitions, oversight and operational support, Waldhauser said. The investigation found that pre-deployment training and personnel turbulence hampered the unit, he said. It also found that the integration and training with partnered forces in Niger was inadequate. The team did not meet the standards of familiarization and integration with the Nigerien partner force prior to conducting the initial mission on Oct. 3, the general said.

The team also did not rehearse immediate action drills before the mission. “The investigation also found the team inaccurately portrayed the concept of operations for the first of three total missions on Oct. 3 and 4,” Waldhauser said.

These shortcomings call into question the oversight of Special Operations Command Africa, he said.

Africom, U.S. SOCOM and the U.S. Army will continue to examine the results of the investigation and more as the organizations move forward, the general said.

There are about 800 U.S. service members in Niger, DOD officials said. They are there to help local forces build and learn how to provide security. The U.S. military has excellent military-to-military relations with countries in the region and they are helping those nations confront terror groups such as the Islamic State of Iraq and Syria and its offshoots, officials have said. U.S. service members also work closely with French and British forces on the continent.