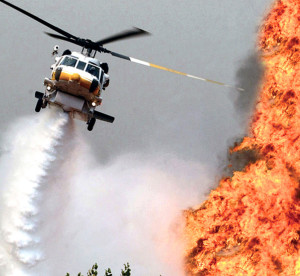 United Rotorcraft, a division of Air Methods, and Sikorsky, a Lockheed Martin company, May 23 received a purchase order from the California Department of Forestry and Fire Protection for the acquisition of a new Sikorsky S-70 Black Hawk aircraft, to be modified into Firehawk® firefighting configuration by United Rotorcraft.

This aircraft will be the latest firefighting tool put into service with CAL FIRE to protect property and the citizens of California.

The purchase order follows a decision by the California Assembly and Senate budget subcommittees approving the budget for up to 12 of the aircraft to replace the state’s aging UH-1H fleet over the next five years. The Sikorsky manufactured S-70 is based on the legendary Black Hawk military helicopter, and is uniquely equipped to endure the unrelenting physical stresses demanded of the aerial firefighting and utility missions.

“Igor Sikorsky founded our company with the vision of saving lives,” said Jeanette Eaton, Sikorsky regional sales executive for the United States and Canada.  “On a daily basis, the men and women of CAL FIRE put themselves in harm’s way to protect and save property, homes and lives. We are honored to have been selected as the best equipped aircraft to address California’s firefighting needs and provide the overall best value.  Even more so, we are humbled to play a role in their demanding mission and fulfilling Igor’s vision.”

Once assembled, the aircraft are modified by United Rotorcraft with a 1,000-gallon (3,785-liter) water tank equipped with a unique snorkel system for 60-second tank refill, extended landing gear, single pilot cockpit layout and a medically equipped interior, all of which arm the aircraft for its role as a multi-mission firefighting tool.

“United Rotorcraft and Sikorsky are honored to support CAL FIRE’s stewardship of over 31 million acres throughout California,” said Mike Slattery, president of United Rotorcraft. “As seasons have become longer and more severe, it’s crucial that California has these high-performance Firehawk helicopters, which allow initial attack capabilities that can knock down fires early before they spread widely.”