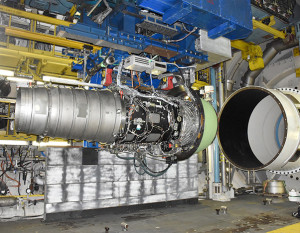 The Rolls-Royce engine is set up here in free-jet mode inside the AEDC C-2 test cell at Arnold Air Force Base. Transonic speeds with large volumetric flow rates were recently achieved during free-jet testing of this high-bypass engine, setting a record for free-jet mode engine testing.

Transonic speeds with large volumetric flow rates were recently achieved during free-jet testing of a high-bypass engine in the AEDC C-2 test cell at Arnold Air Force Base, Tenn., setting a record for free-jet mode engine testing at Arnold.

“Reaching a transonic air speed that approaches Mach 1 is not something we normally do when performing free-jet testing for the high-bypass engines,” he said. “Typically the air coming into an engine during a free-jet test is less than .5 Mach.”

In direct-connect mode, the engine inlet is directly connected to the plenum receiving all the air that is being delivered to the test cell by the plant machinery. Since all the air has to go through the motor, direct connect mode can reach higher Mach numbers more easily than free-jet testing.

Free-jet testing takes place when an engine is not directly connected to the plenum inside the test cell. Instead, an open nozzle is blowing air into and around the engine inlet cowling. In free-jet mode, only 25 percent or less of the air delivered by the facility is ingested by the engine, the remaining air flows around the engine and through the cell.

Due to this setup, a massive amount of air from plant machinery is required to set higher Mach conditions in the cell.

Will Perkins, Plant Operations engineer, indicated it is more challenging to run in free-jet mode because more plant machinery is required to operate for the higher air flows.

“This condition used all of our air supply machinery and most of the exhaust capability,” Perkins said.

For this test, the C-2 test cell received more than 3 million cubic-feet of air a minute.

“That’s equivalent to pulling out all the air filling up a warehouse that is 150-feet long, wide and tall every minute, which is significantly more than our average engine test,” said Adam Moon, AEDC test analyst.

Moon explained that the free-jet testing of large bypass turbofans in the engine test cells at Arnold has been limited to icing testing.

Mike Magistro, Test Operations engineer at Arnold AFB, mentioned the dedication of the team attributing to the success of the test.

“A multitude of factors came together to pull this off, but first and foremost was the amount of time, effort and hard-nosed engineering provided from plant and test operations, design, technology, and our Combined Test Force,” he said. “After that, I’d say it was the test team’s fortitude to hold steady in their seats as we passed Mach 0.80.”

Of this achievement, Rachel Garrard, Air Force test engineer, said, “Getting to learn and to work with plant to achieve these high flow conditions safely was a wonderful experience.”

Melissa Tate, Air Force test manager, added, “Due to many technical requirement changes, this test was one of the most challenging and rewarding to manage. We could not have accomplished it without our excellent team of civilians, contractors and customers.”