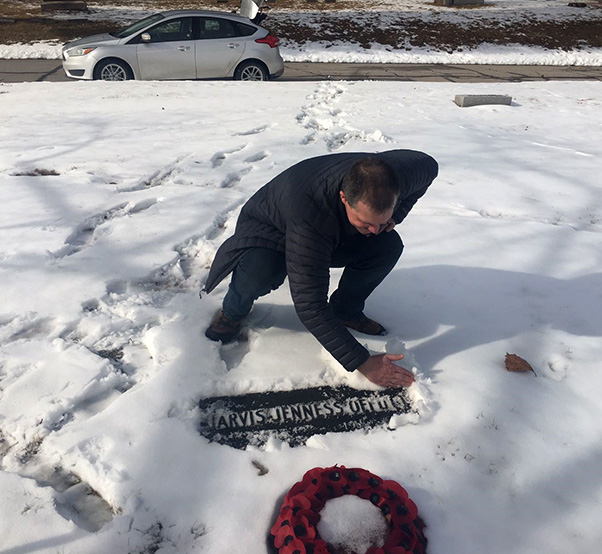 Offutt had been a part of 56 Squadron for approximately a day before he died in flight over France.

Warrant Officer Keith “Nutty” Wing visited the grave during a visit to Offutt as a liaison with the 55th Intelligence Support Squadron. The Rivet Joint specialist works in an operational test and evaluation role, in which he gathers data on RC-135 aircraft to provide information for RAF leadership, allowing them to make informed decisions.

Wing comes to Offutt three or four times a year in a liaison capacity. The first time Wing visited Offutt’s grave was to lay a wreath on behalf of his squadron the day before he was due to return to the United Kingdom. Whilst there he noticed the grass had overgrown the gravestone and used his aircrew knife to trim it. This field cleanup revealed an inscription, which had been buried because the stone had sunk about five inches into the ground over many years.

Wing returned in February 2018 with Kenneth Bauer, 55th Wing Plans, Program and Requirements international program officer, with tools to clear away the ground and make the inscription more legible, but the frozen ground prevented them doing as complete a job as he had hoped. The two even enlisted the assistance of two somewhat bemused ground maintenance workers to lend some stronger tools. 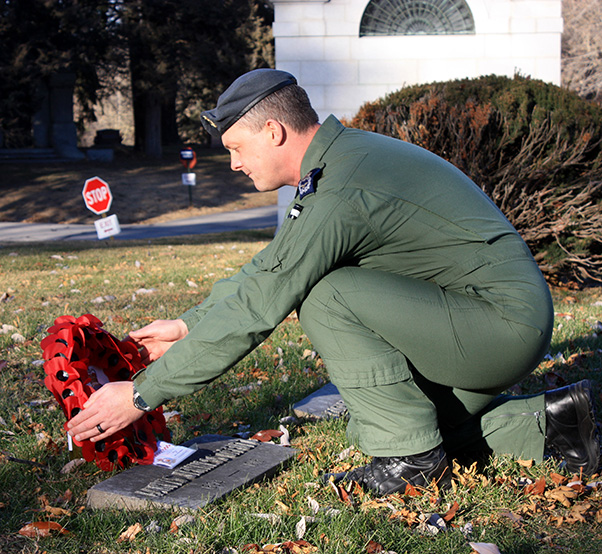 “Lt. Offutt was a member of my squadron on the day he died,” Wing said. “We have a saying on 56 Squadron — the emblem of 56 Squadron is the phoenix, so they are known as “The Firebirds” — and once a Firebird always a Firebird.  It doesn’t matter that he’d only been with us one day, he was one of us. I would like to think someone would do something similar for me.”

Bauer and Wing work together during his liaison visits. When Bauer learned of Wing’s actions to improve the gravesite he began taking steps to improve it further.

“I told Nutty, ‘today I am honored and saddened,’” Bauer said. “Here you stand, a member of a foreign air force, making certain that a comrade’s grave is fit and proper for a man that was in your squadron for 24 hours, while the base named after him has apparently not been out here to see him for quite some time. I told Nutty that the RAF often comes to us saying that they are ‘cap in hand,’ but I would disagree. The RAF brings with it nobility, Esprit De Corps, a sense of history and teamwork that we seem to have lost. I promised that when the ground was no longer frozen I would have the headstone made proper. Today that was completed for Lt. Jarvis Offutt and the headstones of his whole family.”

The work to raise the headstone was completed May 1, 2018. 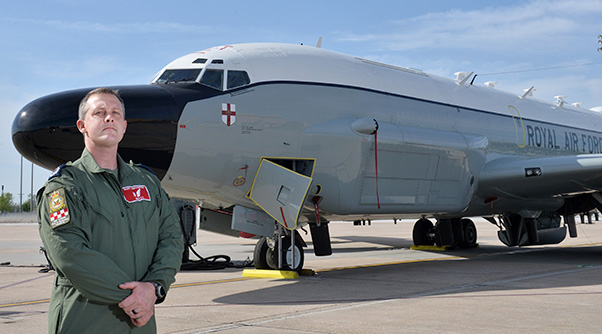 Wing was thrilled to hear that the gravestone had been preserved for the future. Now, the full inscription of the headstone can be read.

“That came as big surprise when I found that out literally last week,” Wing said. “I was sat with Mr. Bauer in his office when he got a phone call from the cemetery to say that it had been done. That was unexpected. I’ve been back to the grave since it has been raised, and it looks so much better.”