Memorial Day weekend is a time to remember and honor the fallen.

The war stories we see and hear are too often about a figure who does not have a personal connection with us. The stories of veterans and their service to our country are out there, but way too many times, when the family and friends are walking from a grave, those stories are locked away forever in a plot of land, unless they were shared during the living years.

Some veterans choose to deal with the horrors of war by keeping them bottled up and away from family members and friends, as they try to not open up that box of memories and nightmares in fear of opening their old wounds.  But every once in a while, one of those nightmares becomes a gift to the rest of us. One of those stories involved a Lancaster family man who spent his time here in the Antelope Valley working alongside many aerospace workers who, like him, were a part of the Greatest Generation.

Over the years at schools around the valley and at Veterans and Memorial Day programs, the story of Carl Frakes was one that always had people looking into their souls and wondering if their own hearts could measure up to that of this young, battle-hardened U.S. Army soldier of World War II . Carl was not a big fan of military service, but back in those days, there was no question — when the nation called, you went and served. When Carl landed in Europe in World War II, the seriousness and the dangers of war consumed his life every day, as he became a foot soldier fighting his way across France with other red-blooded American boys, filled with the desire to just get it over with and get home in one piece.

Then the day came when the Nebraska farm boy and our neighbor became the soldier of legend — when his heart outranked common sense and he put his military toughness aside and embraced his humanity, becoming the definition of the very best of America. The story Carl shared with me, of that long ago time, goes like this:

In war-torn France, 1944, Carl was experiencing the dark side of humanity: pain, suffering, death and evil. With fellow soldiers dying all around him in harsh conditions, his spirit must have been at an all-time low. In a situation like war, where life is so devalued, that same life can also find the spirit to achieve greatness in a simple action. 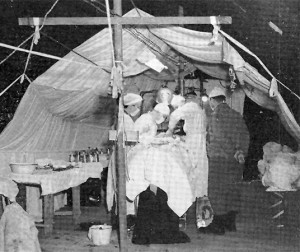 Advancing through a French village, Carl came upon a scene that was pretty much a nightmare, as a young French girl had become a victim of war. Caught in the crossfire between the American and German armies, she was severely wounded and shaking in fear. Carl managed to remove her from the scene and seeing her badly mangled arm, he made the decision that compassion must not become a victim of war. Carl wrapped her up in a GI raincoat and carried her all the way back to an American aid station. When he arrived, the whimpering child was fast-tracked to the front of the line, as other injured American GI’s cleared the way to the operating table. After a quick evaluation, the American medics told Carl that her arm must be amputated, as it was the only hope of saving her life. During the surgery, a medic removed a small ring that was on one of the fingers of her now-severed arm and he gave it to Carl to return to the family. Carl left to return to his unit and deliver the news to the young girl’s family that she would live, and to return the ring.

A simple child’s ring became the definition of the human experience, when the good in the world finds its way into people’s hearts. Carl was gifted that ring by the family and the child. He wore it on his pinky finger for many years, until it found its way into a jewelry box years after the war.

But that wasn’t the end of the story. Years later, Carl made a trip back to France to sightsee and retrace his journey during the war years. On one of those days he stopped to walk the streets of a small French village and asked the question of some locals about the young girl with no arm. Carl was directed down a small country road to a row of cottages and knocking at the door of one, it opened and a woman greeted him. She only had one arm, and as they looked at each other speaking no words, Carl raised his hand to reveal a small ring on his finger. The tears flowed as they hugged, and two people brought together by war found the very best in humanity. When Carl told her “Vive La France,” he was answered with “God Bless America.” 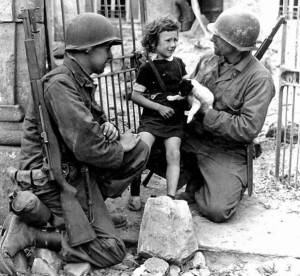 American soldiers, and one of the reasons we fought World War II.

Carl worked here in the Antelope Valley for North American and Lockheed and raised his family, with his wife Marcella, on the north side of Lancaster. Carl and his wife are now at rest at the Good Shepherd Cemetery and not a day goes by that I’m not thankful to Carl, Marcella and his family for sharing this story with me.

Memorial Day is a time to recall stories we need to hear. I wonder how many of you worked or lived next to the bearer of a similar story and never really knew the hero in the everyday clothes that lived it out there, watering his lawn or fixing his car. If somebody is willing to share, take the time to listen. Our nation needs to embrace the citizen soldier and their contribution to a free world and have those stories told for the benefit of future generations.