Steve “Hooter” Rainey celebrated the 20th anniversary of his first flight in the F-22 Raptor, May 17, 2018, with a flight and an unexpected “wash down” at Edwards Air Force Base.

“Well, I didn’t expect to be watered down after the flight — that’s usually reserved for a pilot’s first and last flight — but my incredible team-mates and my Raptor family members wanted to make this a special day for me. They are truly awesome and I am so very fortunate to work with them daily,” said Rainey, Lockheed Martin’s F-22 chief test pilot. He also served as the F-22 squadron’s operations officer, squadron commander and Boeing’s F-22 chief test pilot.

Enjoying the unique opportunity of seeing the Raptor from its infancy, Rainey has been involved with the program from Critical Design Review to the present, including many major milestones. He’s pretty sure that he is the only test pilot ever to have had that unique honor, privilege and opportunity.

Twenty years ago sitting in the cockpit of F-22 4001, the first production Raptor, Lt. Col. Rainey thought to himself, “I’m the luckiest guy in the world.” He told the test operations control room that everything was fine, he needed another minute to check things out — and then he just sat there, looking around, absorbing the moment. He was about to become the first military pilot to fly the mighty Raptor. “It was an unbelievable day.” The plane had been flown first by the F-22 chief test pilot Paul Metz and Lockheed Martin test pilot Jon Beesley at the Lockheed Martin plant in Marietta, Ga. This was to be the first time the customer, for whom the aircraft was built, would take to the air. It was only fitting that the test center at Edwards Air Force Base was the place.

That first flight at Edwards was the beginning of a number of firsts in the F-22s development and the start of true envelope expansion testing for the Raptor. Rainey also performed other firsts including: in-flight engine shutdown and air start testing, aerial refueling, loads test mission, emergency landing gear extension test, and first ferry flight of the F-22 aircraft 4002 from the factory in Marietta to Edwards AFB. He was also the first to test an unplanned dual engine flameout in a Raptor — ever. “The Pratt & Whitney engines are so incredible that they restarted and provided thrust instantly and automatically. The team didn’t know until the data was analyzed that an actual dual engine flameout had momentarily occurred,” explained Rainey.

The Air Force was committed to having something revolutionary in every aspect of the F-22: design, avionics and engines. Rainey said he and other test pilots were initially apprehensive of the new Pratt & Whitney engines from their experiences flying Pratt motors in the F-15 and F-16, due to compressor stalls. That apprehension went away when he first felt the new engine. On an SPO fieldtrip to an engine run at West Palm Beach, Fla., in 1997, before first flight, he fell in love with the F-119 engine, even before it went into afterburner.

“There was a water canal behind the run stand and it started kicking up a little bit of rooster tail even in mil-power. Then the engine went to max afterburner— your body quaked, the fillings in your teeth rattled and a huge rooster tail raced across the water and then the alligators started hightailing it — jumping out of the water to get away from this beast of an engine roaring at them!” laughed Rainey, explaining that this was his Will Smith “Independence Day” moment. “I knew exactly how Will felt when he was flying the spaceship and I thought, ‘I’ve got to get me one of these!’” He was beyond ecstatic. Fortunately, he did get himself one — the first one, to be exact. 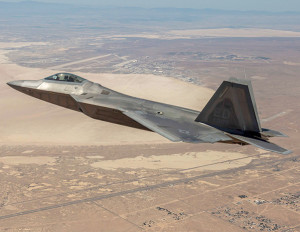 Christopher Higgins captures Steve “Hooter” Rainey as he celebrates the 20th anniversary of his first flight in the F-22 Raptor by recreating a photograph taken 20 years ago by the late Judson Brohmer. Rainey was the first Air Force pilot to fly the F-22 and is now Lockheed Martin’s chief F-22 test pilot at Edwards Air Force Base, Calif.

In the past two decades he has helped to keep the Raptor ahead of its time. He is often asked, since the F-22 fighter is able to operate with impunity anywhere in the world, why there is so much emphasis on modernizing our air power capabilities.

“Every design aspect of the Raptor is innovative,” explained Rainey. “From its revolutionary approach to subsystems, hydraulics and electronics, to stealth, super cruise, its first ever highly integrated sensor-fused avionics system controlled with super computers to its extreme high agility with thrust vectoring and post-stall maneuvering.” Rainey added that the F-22 is still ahead of its time. However, other countries are attempting to narrow the-gap. “The Euro-fighter, the Russian SU-57 and Chinese J-20 are examples of other nations trying to catch up to the mighty Raptor,” he said. “Modernization is moving the bar higher to ensure that the Raptor will continue to be ‘King of the Sky’ well into the future, to support the national defense objectives of the United States of America by providing air dominance anywhere – any time.”

Rainey gives thanks to the pilots and team mates who mentored him along the way, including Lt. Col. Al Kohn, John Fergione, and James Brown. He is especially thankful to his wife, Cindy (Avis), who still supports him- as long as she doesn’t have to choose between him and her new puppy, Tali. He still says he is the luckiest man on earth.

Question: When does a bad guy know there’s a Raptor in the fight? Answer: When his wingman blows up! First Look, First Shot, First Kill-F-22 Raptor — Total Air Dominance!