In June of 1948, the United States Air Force, along with the air forces of Britain, France, Australia, New Zealand, and South Africa would undertake a humanitarian mission of a massive scale to bring aid to the city of Berlin.

Over the next 15 months, 92 million air miles were flown in over 278 hundred missions, providing much needed supplies to the citizens of Berlin. This year marks the 70th anniversary of the beginning of this mission, the Berlin Airlift.

Following World War II, Germany was occupied by members of the Allies, divided among The United States, Great Britain, the Union of Soviet Socialist Republics, and France. This occupation eventually led to the Berlin Blockade, and one of the first events of the Cold War.

“It was very rough. You could not learn a job, you couldn’t do a lot of things; everything was nothing,” Traute Grier, who was 14 years old at the beginning of the Berlin Airlift said. “Everything was being rationed, I remember my mother had to get up in the night to do the cooking when we would have electricity. We suffered and most of the people went hungry, with everyone just scraping for food and hoping continuously that we wouldn’t keep the [Soviets] in Berlin. We suffered, most of the people suffered, some of the people died.”

During this monumental undertaking 101 men and women of the participating nations lost their lives.

“This friendship began in September of 1946, when U.S. Secretary of State James Burns delivered a historic message of hope in Stuttgart, Germany, making a promise to the German people that the U.S. was committed to a free and democratic Germany, a promise still upheld today,” said Maj. Gen. John B. Williams, Air Force Reserve mobilization assistant to the Commander, U.S. Air Forces in Europe – Air Forces Africa. “It was this spirit of resolve that produced over 278,000 missions, delivering 2.3 million tons of desperately needed supplies to the 2.5 million starving citizens of a besieged Berlin.” 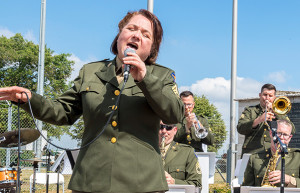 Master Sgt. Michele Harris and members of the United States Air Forces in Europe jazz band performing during the ceremony for the 70th anniversary of the Berlin Airlift, June 26, 2018, in Frankfurt, Germany.

According to Williams, The Berlin Airlift was a monumental challenge for the United States’ newly formed Air Force, setting the standard for modern humanitarian operations.

“It didn’t matter as long as you had a place to live, if it was a dog house or in an alley, we were all just trying to survive. It was like God came down from heaven when we got help,” Grier said.

Perhaps just as important as the supplies delivered, was the message of hope that came along with it for the citizens of Berlin.

“The story of Berlin symbolizes perhaps the most poignant example of how the spirit of liberty can tear down even the mightiest walls of ideological and physical aggression,” Williams said.