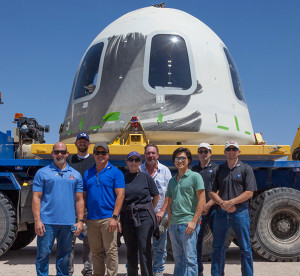 NASA SFEM-2 team poses in front of the Blue Origin capsule after a successful launch and landing that tested sensor technologies for measuring critical data, such as acceleration, pressure, temperature, humidity, carbon dioxide levels and acoustic levels inside a spacecraft.

On July 18, 2018, at 8:35 am PDT, Blue Origin successfully launched its New Shepard rocket from the company’s West Texas launch site with five NASA-supported technologies onboard.

For each of these payloads, this flight was one in a series of suborbital demonstrations to facilitate technology development.

The flight helped researchers collect critical data to help them confirm theories, refine previous results and fine-tune experiments for future testing.
Selected for flight test by Flight Opportunities, many of the payloads on this New Shepard flight aim to provide value to other payloads on future flights. For example, a sensor package developed at NASA’s Johnson Space Center in Houston will help characterize suborbital test flight environments—data critical for implementation of technology and science payloads.

“What we’ve done is put together an instrumentation package that can gather data to characterize the environment on these flight platforms,” said Johnson’s Kathryn Hurlbert, principal investigator (PI) for the SFEM-2, which stands for Suborbital Flight Experiment Monitor-2. “The data we gather will help identify the types of payloads that would be good candidates for testing on a suborbital vehicle.”

SFEM-2 measures critical data, such as acceleration, pressure, temperature, humidity, carbon dioxide levels and acoustic levels. This sensor package first flew with Blue Origin in April 2018. This time, the SFEM-2 team was able to test the technology for a different flight profile.

“We modified the acceleration measurement range, allowing us to capture higher g levels from the flight,” said Hurlbert. “This, combined with the data from the first flight, should provide an extensive set of parameters of the test environment.” 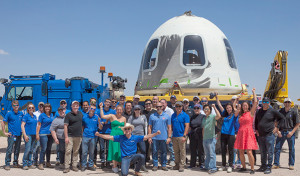 Research teams from NASA’s Flight Opportunities program pose with other researchers in front of the Blue Origin capsule after a successful launch and landing in West Texas. The Blue Origin mission tested five NASA-supported technologies during the July 18 flight.

Some of the payloads flying on this Blue Origin flight also aim to provide value to other researchers. For example, the company Solstar sent the world’s first commercial tweet from space on the Blue Origin flight in April. This time, the company continued work toward increasing the robustness of WIFI in space with an antenna designed to withstand the rigors of a rocket demonstration.

Also, onboard New Shepard was the Vibration Isolation Platform from Controlled Dynamics. Designed to isolate payloads from the disturbances of flight –the platform is also capable of creating environments required for a particular test scenario.

“A main advantage of the platform is that it can cancel out certain kinds of disturbances for anything that’s mounted to it, or it can introduce excitations at specific times to enhance an experiment,” said PI Scott Green. “This platform is destined to be a resource for future payloads.”

Green and his team flew a specific subset of the isolation technology on the flight, gathering data necessary to tune the full system for a future Blue Origin flight.

Other researchers leveraged the flight to gather data to reach specific goals.

Purdue University flew an experimental predictive technology for the control of liquid droplets and avoidance of liquid plugs in tubes—important considerations for condenser flow passage design in phase-change heat transfer systems. Such systems are advantageous for spaceflight because they provide better power capacity, lower volume and better temperature uniformity than single-phase systems.

“We’re flying the experiment to test our computer simulations so that we can publish that data and show the research community that our tool is useful for designing systems for the weightlessness of spaceflight,” said PI Steven Collicott.

Collicott also acknowledged that further development may be needed, depending on the results from the flight.

“A lot of the next steps are driven by discovery,” said Collicott. “We have to ask: What did we miss in our predictions? Are phenomena coming into play that we didn’t anticipate? You have to fly to be sure.” 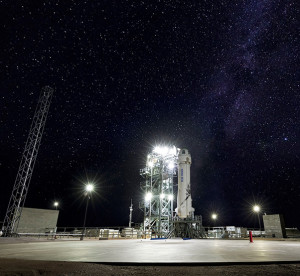 Discovery is also key for a system designed to gather electromagnetic field measurements developed by the Johns Hopkins University Applied Physics Laboratory (APL). The objective for this flight was to characterize the electromagnetic field environment inside the spacecraft to understand the potential effects of strong external and internally generated fields on the spacecraft and payloads.

Echoing the other PIs on the flight, PI H. Todd Smith noted the value of being able to secure suborbital demonstration through Flight Opportunities.

“Flight Opportunities is the only way we’ve been able to secure funding for flights,” Smith said. “We might not be doing what we’re doing today if it hadn’t been for the support NASA has provided for our technology development.”

Through the program, the Space Technology Mission Directorate (STMD) selects promising technologies from industry, academia and government for testing. The Flight Opportunities program has helped to test and mature 136 technologies through 162 suborbital flights. The program is funded by STMD and managed at NASA’s Armstrong Flight Research Center in Edwards, California.