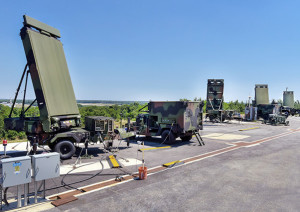 This system was delivered ahead of schedule and is the seventh G/ATOR system delivered in the low rate initial production phase of the program.

Delivery of the first GaN G/ATOR system follows the delivery of six LRIP systems to the Marines that began in early 2017. Utilizing two of those six systems, the Marine Corps achieved G/ATOR Initial Operational Capability (IOC) of the air surveillance mission in February of this year. The remaining four systems will establish IOC for the counter-battery mission later this year. As a result, G/ATOR systems, trained Marines and associated logistics support are now in operational service with Marines.

“The Marine Corps are the first to take delivery of a production ground based multi mission AESA radar that incorporates this advanced GaN technology,” said Roshan Roeder, vice president, land & avionics C4ISR division, Northrop Grumman. “The incorporation of this advanced technology in production radars is unique to the Marine Corps and enables G/ATOR to provide additional mission capability to the warfighter at an affordable cost.”

Both the Marine Corps and Northrop Grumman continue to make detailed preparations to successfully execute the full rate production program, which is scheduled to begin in early 2019.

Additionally, given the AN/TPS-80’s open architecture design, Northrop Grumman was awarded a contract through the Office of Secretary of Defense Strategic Capabilities Office in 2016 to support the addition of a fire control mission.