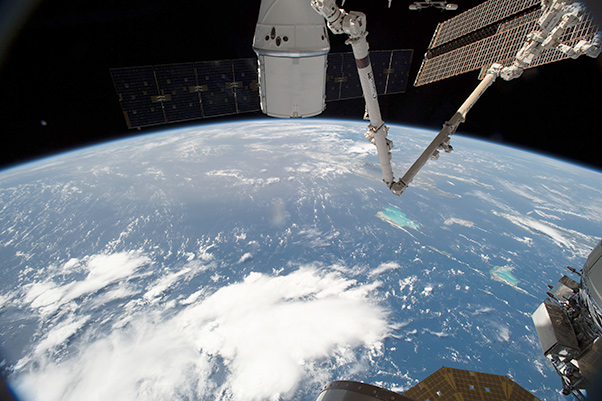 After delivering more than 5,900 pounds of science and supplies, a SpaceX Dragon cargo spacecraft departed the International Space Station Aug. 3 at 12:38 p.m., EDT, and splashed down in the Pacific Ocean after 6 p.m.

Ground controllers used the space station’s Canadarm2 robotic arm to detach Dragon from the Earth-facing side of the station’s Harmony module and maneuver the vehicle into its release position. Expedition 56 Flight Engineer Serena Auñon-Chancellor of NASA monitored its departure as the spacecraft was released through ground-controlled commands.

Dragon’s thrusters fired to move the spacecraft a safe distance from the station before SpaceX flight controllers in Hawthorne, California, commanded its deorbit burn. The SpaceX recovery team retrieved Dragon and more than 3,800 pounds of cargo. This included science samples from human and animal research, biology and biotechnology studies, physical science investigations and education activities.

The Space Algae investigation sequenced the entire genome of an algae population grown in space to identify genes related to growth. Algae may perceive microgravity as physical rather than biological stress, which can trigger production of oils that may help mitigate the harmful effects of microgravity and cosmic radiation during spaceflight, consume waste carbon dioxide, and provide basic human nutrition.

A cellular biology investigation (Micro-12) aims to understand how microgravity affects the growth, gene expression and the ability of a model bacterium to transfer electrons through its cell membrane along bacterial nanowires it produces. Such bacteria could be used in fuel cells to make electricity from waste organic material.

Endothelial Cells in Microgravity as a Model System for Evaluation of Cancer Therapy Toxicity (Angiex Cancer Therapy) examines whether endothelial cells cultured in microgravity represent a valid model to test effects of vascular-targeted agents on normal blood vessels. Endothelial cells are the tissue that form a single layer of cells lining blood vessels and the heart, and all other organs. Angiex was developed as a potential treatment that targets tumor cells, but a better model is needed for future testing. The study may facilitate a cost-effective method that avoids animal testing and can develop safer and more effective drugs to combat circulatory diseases.

Dragon also returned a Latching End Effector that was removed from the station’s robotic arm to be refurbished on Earth and delivered back to the orbiting complex as a spare.

NASA and the Center for the Advancement of Science in Space (CASIS), the nonprofit organization that manages research aboard the U.S. national laboratory portion of the space station, received time-sensitive samples and worked with researchers to process and distribute them within 48 hours of splashdown.

Dragon, the only space station resupply spacecraft currently able to return to Earth intact, launched June 29 on a SpaceX Falcon 9 rocket from Space Launch Complex 40 at Cape Canaveral Air Force Station in Florida, and arrived at the station July 2, for the company’s 15th NASA-contracted commercial resupply mission to the station.