Holloman Air Force Base, N.M., will be re-assigned to a new major command during a ceremony scheduled to be held at 9 a.m. Sept. 28 at the base.

The base re-alignment will move Holloman’s 49th Wing from Air Combat Command to Air Education and Training Command.

The move will allow Air Force leaders, as well as key subject matter experts, to more effectively highlight and support the Holloman mission and its impact on global operations.

“The Fightin’ 49ers at Holloman have a long history of aviation excellence and service to our nation,” said Col. Joseph Campo, 49th Wing commander. “Our transition from Air Combat Command to Air Education and Training Command is going to improve our ability to forge combat airpower for the United States while aligning our wing under the experts for training and education in the Air Force.”

Air Education and Training Command’s mission is recruiting, training and educating America’s Airmen to serve their country in a time of war. This means providing the best training to today’s Airmen and developing them into the future leaders of tomorrow. 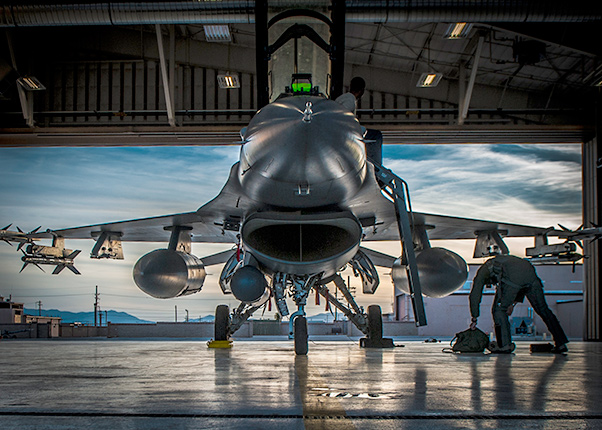 An F-16 Fighting Falcon sits in a hangar prior to departure at Holloman Air Force Base, N.M. May 13, 2015. F-16 students from the 311th Fighter Squadron, a tenant until from Luke Air Force Base, Ariz., are currently flying night operations as part of their syllabus. During the night operations, the students are becoming familiarized with night vision goggles while performing combat training missions.

As the premiere MQ-9 Reaper and F-16 Viper training installation in the Air Force, the 49th Wing will be even more effective and proactive in its formal training units once under AETC.

“Our number one mission is developing combat-ready Viper and Reaper aircrew,” said Campo. “This transition is only going to improve our ability to succeed in this endeavor. Combat airpower starts at Holloman Air Force Base.”