An effort by multiple NASA centers to assist with the California wildfires included capturing satellite data of the smoke plumes and aircraft flights over burned areas to collect information for recovery planning.

“Our goal is to provide the best support possible to our long-standing partners in the state of California,” said Carver Struve, Emergency Management co-lead.

From NASA’s Armstrong Flight Research Center in California, a high-altitude aircraft and two pilots assisted in two separate efforts to collect infrared imagery of California’s raging wildfires and the damage they have caused.

The most intense of those wildfires is in the Mendocino Complex, which became the largest wildfire in California history. The data collected through the two efforts was used to fight the current fires, to provide data to recover from them and to study future blazes.

NASA’s ER-2 based at Armstrong flew a NASA thermal imaging camera to assess some of the fire damage to help officials in estimating the resources needed to recover from the fire, as well as identify some potential dangers from challenges such as mudslides this winter, said Jeffrey Myers, manager of NASA’s Ames Research Center Airborne Sensor Facility in California. The facility is managed by Universities Space Research Association.

The ER-2 was conducting a mission that uses airborne sensors to simulate future satellite data products by flying over large sections of California as part of a long-term study, Myers explained. The mission team Aug. 9 flight tested a key component on the aircraft referred to as the MODIS-ASTER Simulator or MASTER. That instrument will be used for an intensive study of North American fires with the National Oceanic and Atmospheric Administration called the Fire Influence on the Regional to Global Environments and Air Quality. 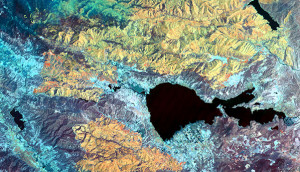 This false-color image was captured on Aug. 9, 2018, by an instrument installed aboard a NASA ER-2 research aircraft that flew over both fires making up the complex in the area around Clear Lake (the central, black feature) in northern California. Active fire zones are seen in yellow, with warm, burned areas in orange. Unburned vegetation appears in blue and green.

“The MASTER sensor is operated in support of principal investigators from NASA’s Goddard Space Flight Center in Maryland and the Jet Propulsion Laboratory in Pasadena,” Myers said. “It is used for earth science research in conjunction with the NASA Moderate Resolution Imaging Spectroradiometer and Advanced Spaceborne Thermal Emission and Reflection Radiometer satellite instruments.”

With as many as 18 wildfires burning in the state, NASA research pilot James Nelson was tasked with flying a 3.6-hour mission in the ER-2 at 65,000 feet Aug. 9.

“The two fires near Yosemite could clearly be seen from my altitude, but the Mendocino fire was obscured by smoke,” Nelson said. “However, our instruments are multispectral and can see through much of the smoke in the infrared bands and we were able to collect data on all the fires.”

The ER-2 aircraft flew a fire mission during the Thomas blaze in Ventura County, Calif., in December 2017.

“We were looking at the infrared data over the active burn area to evaluate the instrument performance,” he explained. “We have colleagues in the U.S. Forest Service in Salt Lake City who wanted the data. They have an infrared mapping aircraft covering those fires, but they needed the information for their burned area emergency response plan. They have 48 hours from when the fire is declared contained to deliver a draft response plan about how to control erosion and begin revegetation. They also will look at severity of burn for areas that are most susceptible to mudslides.”

“The aircraft shows Cal Fire (the state’s arm of the U.S. Department of Forestry and Fire Protection), where the biggest threats to people and property are located, the hottest areas and those parts of the fire that are most rapidly growing so they can deploy resources.”

He was chosen for that role the week of Aug. 6 because of his familiarity with the MQ-9. Howe was one of the pilots of NASA’s Ikhana aircraft, a civilian variant of the MQ-9 based at Armstrong until the aircraft was recently reassigned. One of the Ikhana’s missions, while based at Armstrong, was to validate technologies that could be used to monitor and map fires as they were happening during the Western States Fire Missions in 2006 and 2007. 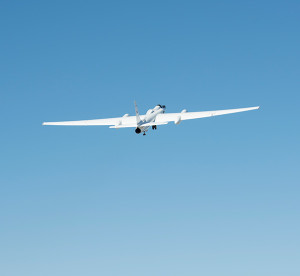 An ER-2 based at NASA’s Armstrong Flight Research Center in California flew a mission over the state’s wildfires Aug. 9 to validate instruments and to collect information to help U.S. Forest Service officials plan for recovery.

The hours leading up to his first shift Aug.6 were eventful.

“The aircraft was coming back on my first night and the crew discovered a new fire between the Carr fire near Redding and the Mendocino fire,” he said. “The blaze that the crew sited became known as the Eel fire. They were the first to spot it and report it to the Cal Fire commander.”

Howe watched the infrared imaging on big screen monitors in the operations center, which is like a NASA control room, and saw how the fires were being mapped out and communicated to Cal Fire’s command center.

“You can clearly see burn areas have a residual heat, even in the middle of the night, and the bright leading edge, like a string of jewels,” Howe said. “At the hottest part, you can see the flames licking off the top of it. It’s pretty intense.”