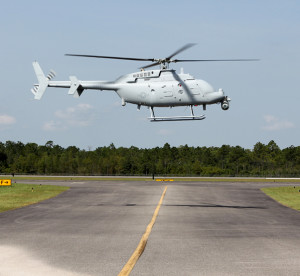 Northrop Grumman’s Moss Point facility is key to producing and testing the MQ-8C Fire Scout, the U.S. Navy’s newest autonomous helicopter that is bringing increased speed, endurance and payload capacity to distributed maritime operations. The U.S. Navy recently completed initial operational test and evaluation aboard the USS Coronado (LCS 4) for the MQ-8C Fire Scout, which has over 1,500 program flight hours. The aircraft is a modified Bell 407 helicopter that is produced in Moss Point and supports quality manufacturing jobs in Mississippi.

“Building on Northrop Grumman’s recent announcement of new production capabilities in Moss Point and a 40 percent increase in employment at the site, the ability to now conduct MQ-8C Fire Scout flight tests where the production occurs will bring new efficiencies and effectiveness to our local operations and improve our ability to serve the U.S. Navy,” said Melissa Packwood, program director, Fire Scout, Northrop Grumman.

In June, elected officials joined local employees to cut the ribbon on the new machine shop section that delivers important capabilities at Northrop Grumman’s Moss Point manufacturing center. For more than a decade, Gulf Coast employees have manufactured rotary and fixed wing autonomous systems in Moss Point that support the U.S. and its global allies. Recent facility upgrades have allowed for new work on manned aircraft to come to the site, diversifying the portfolio of work and bringing new jobs to the region.

In April 2004, Northrop Grumman broke ground in Moss Point with site construction beginning in 2005. In April 2006, Northrop Grumman contributed to aerospace industry growth in southern Mississippi when the ribbon was cut on the 101,000 square-foot facility. The company celebrated its 10 year anniversary at the site in 2016 and recently extended its lease adjacent to Trent Lott International Airport through 2026.