As the saying goes, if you’re performing, never follow a child or animal act for you will surely fail!

My apologies to anyone who has ever fallen victim to that, because this issue’s story is a yarn of a beloved pet that sure goes a long way in bringing a smile to one’s face.

Lancaster’s War Eagle Field had its fair share of colorful characters during its World War II heyday. In the very dangerous business of training young men to fight a war, those colorful characters helped to keep the serious a bit less stressful, even just for small moments, and helped our warriors make it through the days and nights of training. So here’s the special story of one small mascot.

Tailwheel was infinitely more than a mascot. Most any canine could have held down the job of mascot among a lot of dog-loving boys, such as the cadets at War Eagle Field. But a mascot who really loves the Army Air Force uniform and has absolutely no time or use for civilians — well, that’s something else entirely!

No doubt about it, Tailwheel was a pedigreed pup. Anyone with half an eye could have seen that. At first glance, you recognize the characteristics of a patrician Chow. But on closer scrutiny you know he’s at least part German Shepherd. Then too, one instinctively feels there is somewhere a trace of the beloved Scottie, with possibly a touch of Fox Terrier. The ears are a dead giveaway, betraying the Russian Wolf Hound in his ancestry, while the eyes speak eloquently of the English Bull. The hindquarters are mostly plain dog, but the front legs could come only from a long line of aristocratic Pomeranians. From all that, you can deduce from this description that Tailwheel was no ordinary hound and that hundreds of flyboys could find a little bit of the family dog to embrace with his presence. 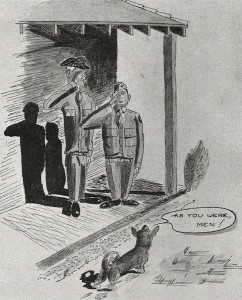 Where or when Tailwheel acquired his deep affection for airplanes, and particularly those who flew them, we were told was a military secret. He merely showed up one fine day in Lancaster and, without much ado, adopted the Cadet Corps and the Army Air Forces Detachments. This Army Pup insisted on drilling with the cadets and it was said that you never told those Cadets that Tailwheel doesn’t understand or obey commands. Another thing you never asked was whether or not Tailwheel eats with the Cadets or flies with them. You know darn well those type of things were addressed by Army regulations. But of course there were those rumors but no outsiders had any business prying into the comings and goings of an Army Mascot!

One thing though was certain and a fact of life. At mess call, Tailwheel took off post-haste for the dining room. Those with sharp eyes might have noticed a well-behaved and militarily correct mascot, unobtrusively strolling about from friend to friend accepting with dignity such gratuities as might be offered. After all, a dog can’t keep up his regular duties on an empty stomach! And as for flying, the sound of an airplane motor was music to Tailwheel’s ears. Moreover, he always he always managed to show up on the job whether the boys were flying off the home field, or one of the two auxiliary fields elsewhere in the Valley. How he got there and back was, again, something rarely discussed and was pretty much another military secret.

Tailwheel was no panty-waist, they said. He could and did take the roughest sort of treatment and came back for more. He would take anything from a cadet or Army officer, but woe betide the civilian who ventured to get fresh with him. 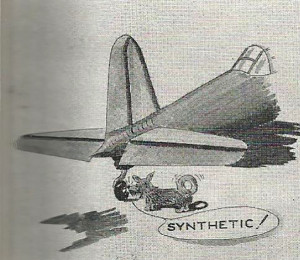 A little bit of Tailwheel humor from another class book.

To his way of thinking, War Eagle Field was a place for men in uniform and he growled his disapproval every time a civilian walked across the field. A friendly whistle or call from a cadet would bring him scampering at once, but no amount of coaxing could lure him to the side of a civilian. For all the years Tailwheel saw those cadets come and go, he always remained true to the uniform.

Some dogs really do have a charmed life and Tailwheel was certainly one of those dogs. I feel a bit sad to think that when the training days at War Eagle Field came to a close, his rock-star status came to an end and he lived out the rest of his life in Lancaster as a porch dog. I’m sure as he napped, sweet memories of many faces and adventures crossed his mind. It’s said that he was laid to rest somewhere around the old parade grounds at War Eagle Field, so his spirit could harken back to the days when an Army base was his personal playground and he could connect with the spirits of all those that loved this Army Air Field Mascot. I bet, if in the still of the night a civilian walked by his final resting place, we might just hear the growl of disapproval whispered from the darkness, and we would hasten our steps so as not to tread on the legacy of one special pooch who saw young men go off to war with his special glow in their hearts.