Dale Jones might be 99 years old, but he shows no signs of slowing down.

He stays active and spends much of his time bowling, at church, or helping his community near his home in the small town of Zanesville, Ohio, located 50 miles east of Columbus.

Jones is many things to his family and friends. He is a loving father, grandfather (or “Papa”, as he is affectionately known), and proud citizen. He is also known by one more title, and it is quite visible on his trusty black ball cap. It reads “World War II Veteran.”

To really appreciate this man and the life he has lived, you have to sit down, put away your smartphone and just listen as he talks about his time in the military and serving in the war.

The pride and conviction of how he tells his story is evident as he sits in his chair with his military decorations framed nearby. His stories are something his family and friends continue to appreciate all these years later.

“Listening to my Daddy tell his war and military stories is something I never get tired or bored from,” said Shellie Hohl, Jones’ daughter and one of his three children.

Jones enlisted into the U.S. Army in September 1940, a full year before American involvement in World War II. He originally wanted to join the U.S. Navy, but was not allowed to join for medical reasons.

“I thumbed my way up to Cleveland and got my physical for the Navy,” he said. “However, they said there was something wrong with my lower body.” 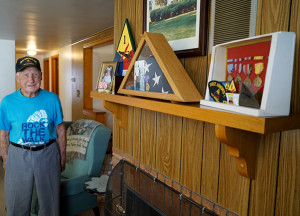 Former U.S. Army Soldier Dale Jones poses with the medals he received during his service with the 1st Armored Division during World War II.

This minor setback did not deter Jones, or his motivation to serve his country in uniform. After enlisting in the Army, Jones completed basic training at Fort Knox, Kentucky. Soon after, he was stationed at Fort Dix, New Jersey, serving as a support truck driver and mechanic.

In 1942, a young Pvt. Jones, now assigned to the 1st Armored Division, was shipped overseas and eventually ending up in Wales at an Army depot moving jeeps onto transport ships. He recalls the large amounts of military equipment he was working with.

“You’ve never seen so much material in your life,” said Jones.

There was a reason for the large amount of military transportation and weaponry. The Allied forces were preparing for the invasion of North Africa in November 1942 to open up a second front in the war, in an operation that would come to be known as Operation Torch.

Jones recalls the journey to Africa being a dangerous one. He was told that their route across the English Channel to the Mediterranean Sea toward Algeria was filled with mines and enemy submarines.

Jones’ unit was part of the task force assigned to seize the port city of Algiers. As they reached the port, a few transportation ships were hit by enemy subs, leading to the death or injury of Allied service members.

“Just as we came into the mouth of the Mediterranean, one of our transport ships was sunk by a submarine,” he said. “All of the nearby ships hurried to rescue the GIs in the water. I’ve never seen something like that in my life.” 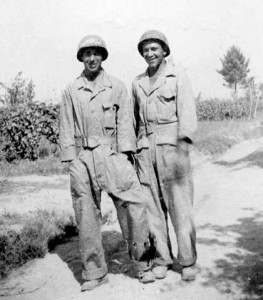 Dale Jones (left) and a fellow Soldier on Anzio Beach, Italy during World War II in 1944. Jones served with the 1st Armored Division in both the North African and Italian campaigns during the war.

The fight for North Africa had begun.

Operation Torch
The operation began on Nov. 8, 1942, and it would end 8 days later on Nov. 16. The amphibious landing in the city of Algiers was one of three landing sites by three large task forces during the operation, including Casablanca in French Morocco and Oran in Algeria.

Jones recalls the ships pulled up to the harbor to let out as many Soldiers as possible in Algeria, but they were met with enemy resistance from the Vichy French forces.

Operation Torch was a significant moment in the war. The victory in French Morocco and Algeria discontinued the resistance of French forces in North Africa and eventually led to the French North African government joining the Allied war effort. Following the success of Operation Torch, elements of the 1st Armored Division along with additional U.S., British and Free French forces were on the march to Axis-occupied Tunisia.

March to Italy
In February 1943, Jones and his unit found themselves in the Battle of Kasserine Pass, a two-mile wide gap located in the Atlas Mountains of west-central Tunisia. Their objective was to hold the line at Kasserine pass in an effort for U.S. and British forces to push the German and Italian forces west. Jones recalls the fighting was fierce, and the U.S. suffered many casualties.

“We got chewed up pretty bad, and we had to get help from the Second Armored Division,” he said. “After the fighting, our job was to haul the German prisoners down to the prison camps.”

Following the victory in the Tunisian Campaign in May 1943, Jones and his outfit traveled across the Mediterranean fighting through Sicily to Anzio Beach, Italy on their way to Rome. Elements of the 1st Armored Division and other Allied forces fought their way up the mountains. Jones recalls his truck pulling a 105mm howitzer. The fighting was heavy during this period, with the Axis forces having control of much of the region. 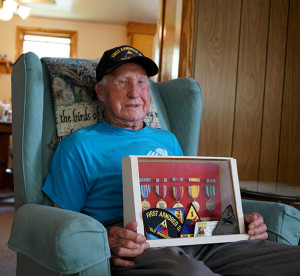 Former U.S. Army Pfc. Dale Jones, a native of Zanesville, Ohio, holds a shadow box with a picture of his younger brother Glen Jones, and the flag that was draped over his brother’s casket. Glen Jones served as a U.S. Marine during World War II, and he was killed in action during the fighting in Okinawa. Dale was one of six brothers who served in the U.S. military during the war.

“We were hauling gas, water, rations, and ammunition up and down our supply lines during the fighting in Italy to help defeat the Germans,” he said. “They would shell us all night so we had to dig underground and hide and try to sleep there. One night a delayed-fuse shell hit next to us and exploded under the ground, lifting us up and dropping us. We were lucky to be alive.”

The heavy fighting continued all the way through the Po Valley to Rome throughout 1944. Eventually the region came under Allied control in May 1945 and Jones and his follow Soldiers were once again tasked with transporting German prisoners of war following the surrender of the Axis forces in Italy.

Band of Brothers
Jones comes from a very large family. In fact, he was one of seven brothers.

Servicing the nation was a sense of duty for all the Jones boys. Six of the Jones brothers served in the U.S. military during World War II: Dale, Vaughn, Francis, Glen, Bill, and Harmon. Jones’ other brother Joe was disqualified from military service due to medical reasons, but he served the nation in a different capacity as an instrument technician/inspector at Wright-Patterson Air Force Base in Columbus, Ohio, for many years.

Unfortunately, tragedy struck the Jones family when his youngest brother Glen, a U.S. Marine, was killed during the fighting in Okinawa, Japan. Jones learned of his brother’s death when he returned home following completion of his service in June 1945. Glen was the only one to be killed in action during the war. To this day, Jones honors his brother’s sacrifice with his cased flag, his Purple Heart medal and a picture of Glen near his favorite chair. 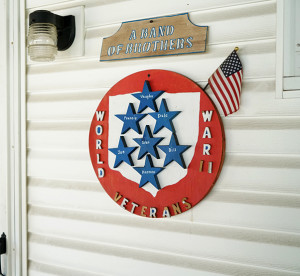 A handmade plaque outside of Dale Jones’ home in Zanesville, Ohio displays the names of all 7 Jones brothers. Dale has removed an American flag from the plaque after each one of his brothers passed away as a symbol of respect for his brothers. Dale’s flag is the lone flag still displayed.

Life after service
During the end of the fight in Italy, then-Pfc. Jones was called one day by an Army officer ordering him to get on a plane to Naples. When he arrived in Naples, Jones was told he would be going home.

“Those were the best words I had ever heard in my life,” he said. “I thought I was going to France or to the Pacific.”

Jones found his way back home to Ohio with just $300 in his pocket following three years of serving in the war.

Jones eventually settled in the town of Zanesville in 1956, had a family, and still lives mostly independent in the same house where he raised his family. Jones is set to celebrate his 100th birthday this November, and a local veteran organization will be throwing him a party to mark the milestone. Many of his grandchildren have also followed in his footsteps by serving the nation in uniform.

Although Jones hung up his uniform decades ago, he still has fond memories of his time in service, and he is always willing to give advice to the next generation of U.S. Army Soldiers.

“When training in the field, always work as a team and not an individual,” he said. “There is no time to hotdog anything, in the field or in the service.”
Simple but sound advice from a simple yet extraordinary man.