The UH-60 Black Hawk has been the Army’s front line utility helicopter for the past 40 years, and it shows no signs of letting up.

Now in its fourth decade of service, the Black Hawk was developed as a result of the the Army’s requirement in 1972 for a simple, robust and reliable utility helicopter system to satisfy projected air-mobile requirements around the globe.

Named after the Native American war chief and leader of the Sauk tribe in the Midwest, Black Hawk, the first production UH-60A was accepted by the Army in 1978, and entered service in 1979 when it was delivered to aviation components of the 101st and 82nd Airborne Divisions. Since that time, the Black Hawk has accumulated more than nine million total fleet hours, and has supported Soldiers in every major contingency operation the Army has executed, including Grenada, Panama, Iraq, Somalia, the Balkans, Afghanistan and throughout the Middle East. 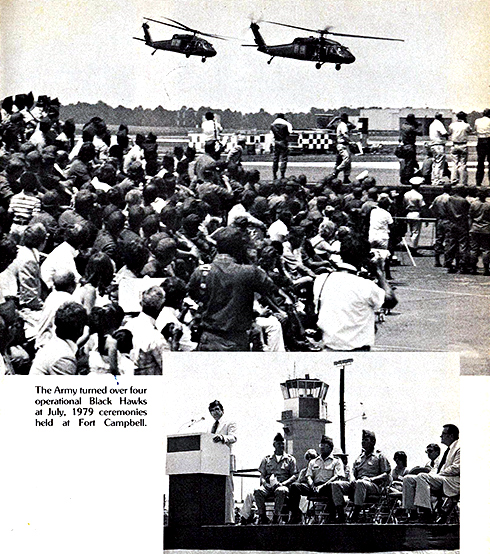 Over the years, the helicopter has been modified and upgraded to support evolving missions and roles, including mine laying, medical evacuation and special operations. Today, the Army continues to integrate emerging technology enhancements into the Black Hawk fleet to increase the performance, reliability, availability and maintainability of the platform through addition of technologies such as the integration of the Improved Turbine Engine; upgrades to the airframe, including an improved troop seat for additional crash worthiness; and a lightweight, composite all-moving tail.

“Developing and fielding an aircraft that has earned and maintained an extraordinary reputation of remarkable service supporting Soldiers over a full spectrum of military operations these past 40 years is the direct result of the incredible efforts of all the government and industry teammates who have supported the Black Hawk program throughout the history of the program,” said Col. Billy Jackson, program manager for PEO Aviation’s Utility Helicopters Program Office. “I’m exceptionally proud of this team and the herculean effort everyone puts in managing a very complex program with such sustained success.”

Today, the UH-60 Black Hawk makes up the Army’s largest rotary wing fleet with more than 2100 airframes in the current inventory. As production of the most current H-60M model continues, over the coming years the Army will divest its remaining UH-60A and L aircraft, to be replaced by 760 UH-60Vs. 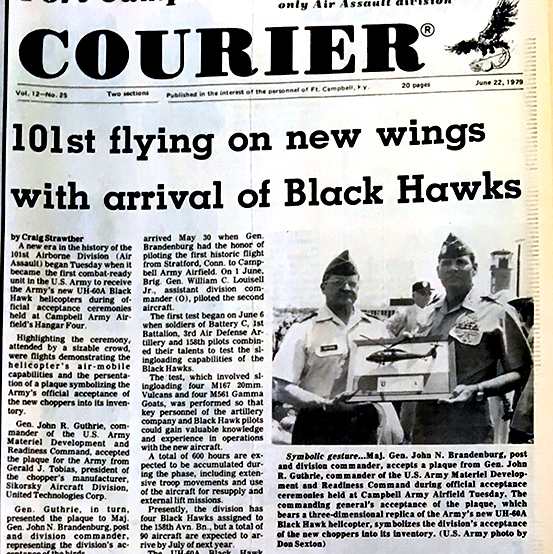 With multiple versions of the H-60 Black Hawk in service, the helicopter is considered the “workhorse” of Army Aviation. Besides being the U.S Army’s primary tactical transport helicopter, approximately 1,200 H-60s operate in 30 partner and allied nations, making it a key component to enhancing partner capacity.

For nearly half a century the Black Hawk has served remarkably as the primary medium lift, multi-role helicopter for the U.S. Army. Although it has been around for longer than most of the current generation of Soldiers it supports, don’t expect to see if fly off into the sunset anytime soon. With planned major upgrades such as the Improved Turbine Engine on the horizon, the platform will be a key component of the Army Aviation fleet through 2054.

“The Utility Helicopters Program Office, in collaboration with our government and industry partners who support the Black Hawk, have worked diligently for 40 years to provide operational commanders and Soldiers the much needed capabilities the Army’s workhorse helicopter provides,” said Jackson. “We will continue to adapt to meet current and future needs to ensure the Black Hawk remains relevant in the operational environment over the next 40.” 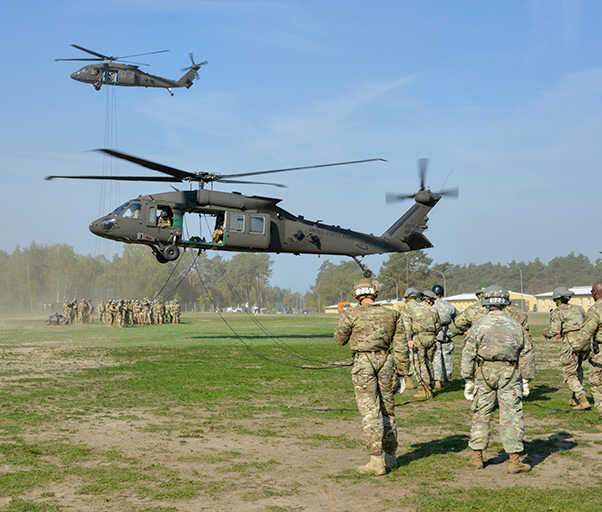