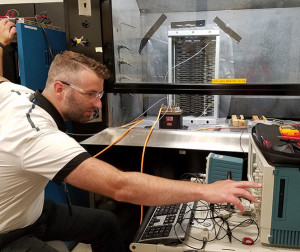 Ingenuity and collaboration were the keys to success as a group of Air Force Research Laboratory engineers took a series of tests to new heights.

At the request of NASA, AFRL rapid-response Systems Support researchers delved into the realm of space to help determine the effects of unintended electrical arcing on astronaut space suits during extravehicular maintenance.

NASA researchers came to the AFRL team with a simple question.  How does an electrical arc behave in a vacuum?  Although this may seem like a fairly simple question, it was a concept that had not been explored fully before.

“What was not understood were the ramifications of an arc in space,” said Electrical and Electronic Materials Evaluation team lead Brett Jordan. “What are the mass and velocity of the particles produced by the arcing, and what would be the effects of those metal particles flying off the arc in that environment?”

To answer this question, AFRL began by determining how to build fixtures for a low-pressure test and performing proof-of-concept testing to determine the best method to reliably create an arc in the planned lab setting. This initial series of tests helped the researchers understand the materials, positioning, and current needed to successfully generate the arc, as well as the proper test setup to use for an Earth-orbit vacuum environment.

With this initial data in hand, the team then began to prepare for low-pressure testing. Reaching out to fellow AFRL materials and electronics researchers, the team acquired a low-pressure chamber and secured a laboratory for conducting the tests. 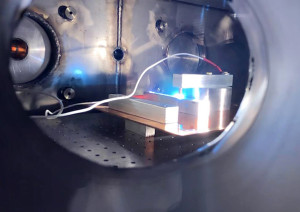 The Air Force Research Laboratory Materials Evaluation team generates an electrical arc fault in a vacuum chamber in support of a NASA research effort to determine the effects of arcing in Earth-orbit conditions.

“It really was a team effort,” said electrical engineer and project lead Corey Boltz. We received assistance from many different teams throughout AFRL to make this happen.”

After another round of experimental tests and setup, the team was ready to begin the final round of testing and data collection. With the assistance of NASA engineers, the AFRL team performed a series of 35 tests in the low-pressure chamber. Each test run was a careful exercise in control and precision. For each individual test, the team followed a rigorous process that involved precise placement of the test fixture, calibration of multiple high-speed data capture cameras, and pumping the chamber down to extreme low-pressure atmospheric conditions.

The team completed the tests quickly, despite the complex setup required between each test run. From start to finish, the low-pressure test runs were completed in nine days. Jordan says this was possible because the AFRL test chamber offered capabilities that were not immediately available to the NASA team. Because of the chamber’s design, its pressure could be lowered to the necessary test conditions in about half the time it takes a typical chamber to achieve the same conditions. As a result, more test runs could be completed in a shorter period of time.

“For us, it was all part of our rapid-response mission, and the customer appreciated that quick turnaround,” Boltz said.

The data gathered from the testing provided important data that NASA is using to structure their own set of tests. 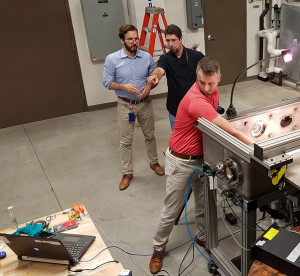 “This data-rich testing enabled the optimization of tests being performed at three other facilities, which are adding various other factors related to the extra vehicular activity scenario,” said NASA technical lead Amri Hernandez-Pellerano. “The AFRL pathfinder tests enabled us to properly plan resources in this study.”

Jordan added that since these tests were the first space vacuum work the group had performed, the testing event benefited AFRL as well by expanding the base of knowledge for electrical arcing in low-pressure environments. He said the data and processes established will be useful for the project researchers and other AFRL teams as they tackle future endeavors.

It was a win-win situation that resulted in quick answers and valuable data for everyone involved.

“As the Systems Support rapid reaction team, that’s what we do,” said Jordan. “We’re proud of our mission.  We take it seriously, we enjoy it, and when we need to come up with good answers quickly, we make it happen quickly.”