Mojave has a long tradition of honoring its heroes and Veterans Day is always a special occasion, especially this year, with 2018 commemorating the 100th anniversary of the end of World War I.

“Armistice Day, held on Nov. 11 every year, commemorates the signing of the armistice between the Allies and Germany at 11a.m. on 11 November 1918 — the 11th hour of the 11th day of the 11th month — and this year we are commemorating the 100th anniversary of the end of World War I,” Hansen said. “In 1954, to honor veterans of all wars, Armistice Day was changed to Veterans Day.”

A letter was read from Congressman Kevin McCarthy. Michael Clark, representing Kern County 2nd District Supervisor Zack Scrivner, read a message that paid tribute to all veterans and their families, who have served to preserve our freedom and democracy for everyone today and for future generations. 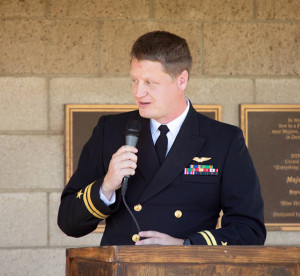 Following welcoming remarks, keynote speaker U.S. Navy Lt. Jason Miller, a recent graduate of the U.S. Navy Test Pilot School and F/A-18 Weapons Systems Officer with VX-31 at China Lake, opened his talk saying, “There are many reasons why people serve in the military, but no matter the cause, all have belief in the fundamental common goals that we are called to serve.”

Scrivner’s message stated, “One hundred years ago today, the culmination of World War I concluded with the Treaty of Versailles marking the end of a war that was believed to be the war to end all wars; however as we all know, that lofty goal was not achieved. Our world is still darkened with an assortment of enemies who relentlessly threaten our way of life.

“We believe those who serve are worthy of our deepest gratitude. The intense sacrifices made by those who answered the call, affords us the freedoms we enjoy, the constitution we delight in and the flag that symbolizes our Republic.”

Following welcoming remarks, keynote speaker U.S. Navy Lt. Jason Miller, a recent graduate of the U.S. Navy Test Pilot School and F/A-18 weapons systems officer with VX-31 at China Lake, opened his talk saying, “There are many reasons why people serve in the military, but no matter the cause, all have belief in the fundamental common goals that we are called to serve.”

“I admired my father who was an Air Force pilot.” Miller said. “I knew if I joined the military, I’d have to beat him somehow, so I joined the Navy so I could fly off an aircraft carrier.” Miller served aboard the USS Harry S. Truman (CVN-75) flying combat missions in support of Operation Enduring Freedom.

“Today, more that 2.2 million U.S. active duty and reserve personnel are serving around the world,” Miller said. “The numbers of those who serve and have served is vastly increased when their families — wives, husbands, sons, daughter, mothers and fathers — are factored in, for the sacrifices made in terms of birthdays, and milestones missed, in lengthy separations and for some, the ultimate sacrifice of losing a loved one,” he said. 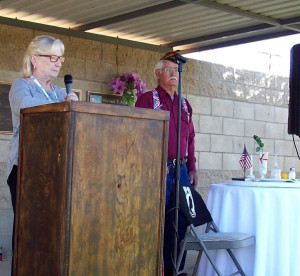 An emotional POW/MIA Table Tribute was presented by Ken and Sally Kendall. Ken Kendall served in the U.S. Marine Corps in Vietnam.

Miller declared that he often felt uncomfortable when people thanked him for his service. “I just didn’t know how to reply,” he said. “I think I have one of the coolest jobs in the world and I know those who have gone before me have done so much more with so much less.”

He said, “I now respond to that statement with a simple thank you for your support. And I really mean that. Thank you to all those I’ve seen go out of their way to thank those that served or are willing to be part of our country’s service.”

He thanked everyone, especially parents and children of service members, who put up with a lot of moving and enduring a sometimes trying lifestyle. He also thanked those who help with veteran organizations and volunteer efforts.

“No one forced us to be here today. We do have pride in those who have served and gratitude for what it has brought us. Our gathering today is one small spark in a flame of pride that burns across the nation today and every day,” Miller concluded.

An emotional POW/MIA Table Tribute was presented by Ken and Sally Kendall. Ken Kendall served in the U.S. Marine Corps in Vietnam.

“This table is our way of symbolizing the fact that members of our military are still missing from our midst,” said Kendall. “They are commonly called POWs or MIAs. They are unable to be with us this day and so we want to take this opportunity to remember them.”

Tami Kelley with Mojave High School announced that the Wreaths Across America Ceremony will take place at Mojave Cemetery at 3 p.m., Dec. 17.

The Arlington Wreath Project was started in 1992 with the donation and laying of 5,000 remembrance wreaths at Arlington National Cemetery. This became an annual event. In 2005, a photo of gravestones adorned with wreaths and covered in snow circulated around the internet and spurred the creation of Wreaths Across America. The mission, “Remember (remember the Fallen), Honor (honor those that serve and their families) and Teach (teach the children the value of freedom),” characterized the project’s goals perfectly. “This tradition is carried out at cemeteries across the nation and right here at the Mojave Cemetery,” said Kelley.

Additional highlights included the reading of the American’s Creed written by William Tyler Page and adopted by Congress in 1918; the singing of God Bless America, led by Timothy Lomba; Taps, and a closing prayer by Pastor Aaron Atherton, New Life Baptist Chapel.