Robert “Bob” Harness is a World War II American veteran, and his military story begins the day he turned 18.

“The war had ended, but treaties hadn’t yet been signed, so the draft was going strong,” he recalls.

Harness says the way he saw it at the time was if he volunteered, he’d have a choice of which branch of the military to serve in.

“I didn’t want to dig fox holes and I liked to sail, so I joined the Navy,” he grins.

Harness says he signed up for what was then referred to as “A baby cruise.”

“It’s a two-year enlistment tour that satisfies the four-year draft requirements,” he explained.

Born and raised in Bay City, Mich., Harness was looking forward to seeing the world with the Navy. His tour began stateside as he was first shipped to San Diego, Calif., for basic training.

“After boot camp I was assigned to the USS Jason ARH 1, an American heavy hull repair ship and off to China,” he reminisces. 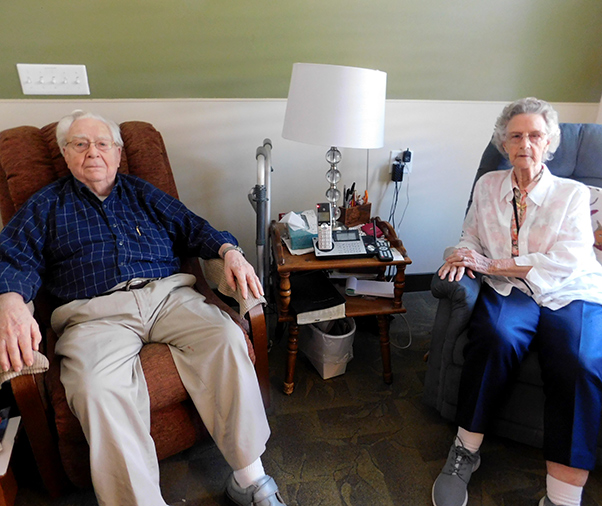 Ninety-year-old World War II Navy veteran Robert Harness and his 89-year-old wife Margaret. The couple are enjoying their “golden years” at the William J. “Pete” Knight Veterans Home in Lancaster, Calif. “I don’t think we could have found a place any better,” Harness says of their life at the local veterans’ home.

A seaman 2nd class, Harness spent the next several weeks sailing along the Whangpoo River. He says he remembers Shanghai as a very attractive community and said the Chinese people were very friendly.

During his tour on the repair ship, Harness was part of the team repairing Pacific Fleet vessels. Soon after, however, he was promoted to seaman 1st class and assigned to a United States destroyer, the USS Blue DD-744, respectfully referred to as Blue. The destroyer had been named after Lt. Cmdr. John S. Blue and from then on was simply addressed by its crew as “The Blue.”

Harness was a fortunate sailor. By the time he was sent into the troubled Pacific waters, the fighting had ended. He was spared that part of the war. His job was to help put crippled ships back in commission and to uphold a peace-keeping mission.

While stationed on the destroyer, Harness toured several Chinese ports and the Marshall Islands. “We spent three to four weeks in each port,” he remembers.

Harness considers life at sea anything but dull. “Sailors will be sailors and life at each port was full of harmless, but fun antics,” he grins. He, along with some of his past shipmates, still talk about the mysterious disappearance of a “well-equipped” military jeep. 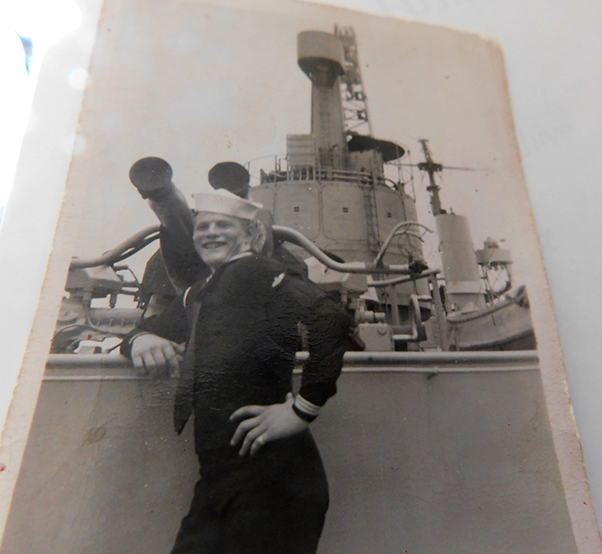 “I still receive invitations to reunions from the crew of the Blue,” he said. “The last invitation said perhaps we’ll find out what ever happened to the jeep!”

After returning to San Diego, Harness was enjoying life back on American soil and went looking for some fun and carefree adventures. It was during one of those adventures that Harness met the love of his life.

“I was at the local skating rink when I spotted her,” he said. Harness says that for him, meeting Margaret Clemo was love at first sight, and six months later they were married.

Seventy-one years later, Harness says life with Margaret has been an unbelievable adventure.

The couple moved to California in 1960 and have been here ever since. Life for the couple was good, but it wasn’t without its woes as well. The couple suffered the painful loss of one of their children some years ago, but do enjoy a close relationship with their four remaining children.
“Three of our children live here in the Antelope Valley and we see them frequently,” Margaret Harness says.

Today, they are happily settled in Lancaster, Calif., and are living out their golden years at the William J. “Pete” Knight Veterans Home. 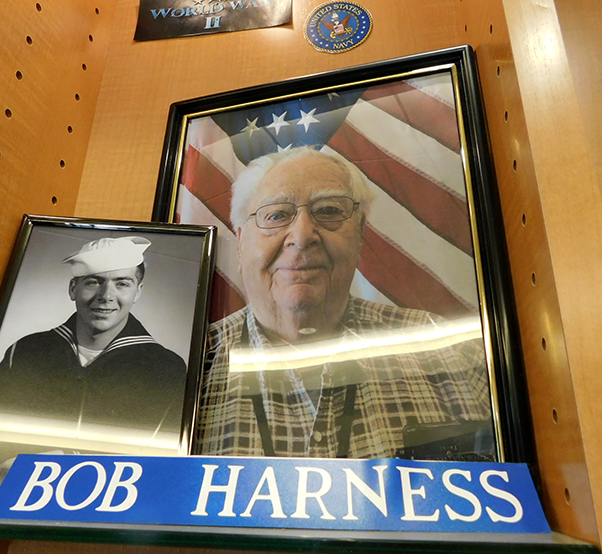 “Our children include us in most of their outings and when we’re not spending time with them, we are enjoying some of the many activities and or outings offered here at the veterans’ home,” Margaret Harness said.

She said when they decided they were ready for assisted living, the local veterans’ home came to mind. “We watched the facility being built several years ago, moving here was like coming home,” she said.

“The staff here is wonderful,” Bob Harness said. He says they are helpful and check in on the couple several times a day.

“They make sure we are well and are taking our prescribed medications,” Bob said. “We don’t have to worry about anything,” he said. “Life is good!”