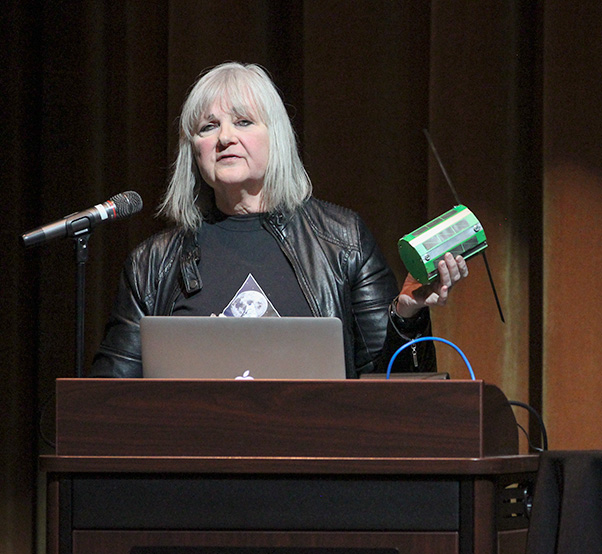 Randa Milliron, CEO and co-founder of Interorbital Systems Corporation, was a guest speaker participating in a series of educational talks hosted by the Antelope Valley Board of Trade.

Milliron spoke at the Antelope Valley College Nov. 14, highlighting the roles in STEM education of the “New Space” movement and the “Small Satellite Revolution.” Interorbital provides satellite kits that are the center of curricula for academic programs in more than 25 countries. Kits cost approximately $8,000 each and over 150 have been sold.

Milliron says her company can build satellites, rockets and spacecraft, and launch them at a fraction of the cost of standard practices. Using hypergolic white fuming nitric acid and turpentine for oxidizer and fuel, she says it is less expensive to handle, store and produce, and also less toxic than most propellants.

“Satellites that used to cost millions and even billions of dollars, can now cost tens of thousands,” said Milliron, holding up a satellite the size of a coffee can which students can put together with supervision. Not only does her company want to be one of the first to inhabit the lunar heavens above, she has her sights set on Venus, expanding the presence of the human race throughout the solar system. 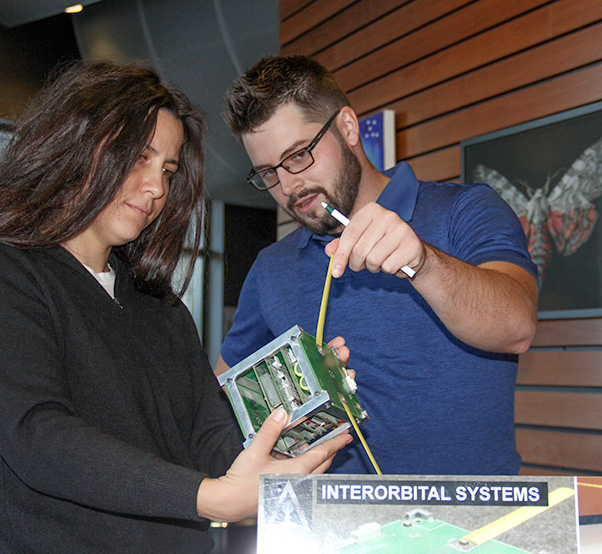 Taleeya Del Real, a student enrolled in the Electronics Technology Program at Antelope Valley College, learns about small satellite kits from Sean Wainwright, a graduate student at of Purdue University who is interning at Interorbital Systems at the Mojave Air and Space Port.

“You can learn the black arts of making satellites and we will launch them for you,” said Milliron.

Her company is in the process of developing a Neptune line of launch vehicles that would launch payloads into orbit from sea platforms.

Interorbital Systems is working on a U.S./Australian joint venture to create a World Land-Speed Record vehicle designed to hit 1,000 miles per hour, that will be powered by their 62,000-pound thrust rocket engine. The vehicle will be driven by Rosco McGlasham of Australia, using the dry lake bed at Edwards Air Force Base, Calif.