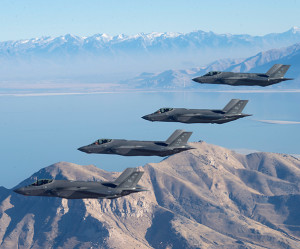 A formation of F-35 Lightning IIs from the 388th Fighter Wing and 419th FW stationed at Hill Air Force Base, Utah, perform aerial maneuvers during as part of a combat power exercise over Utah Test and Training Range, Nov. 19, 2018. The exercise aims to confirm their ability to quickly employ a large force of jets against air and ground targets, and demonstrate the readiness and lethality of the F-35A. As the first combat-ready F-35 unit in the Air Force, the 388th and 419th FWs are ready to deploy anywhere in the world at a moment’s notice.

The Air Force selected Wright-Patterson Air Force Base, Ohio, as the preferred location for the F-35 Lightning II Hybrid Product Support Integrator organization which supports the entire F-35 enterprise to include joint and international partners.

“Wright-Patterson Air Force Base has the trained acquisition professionals with the right fighter aircraft experience to run this organization for DOD’s Joint Program Office,” said Secretary of the Air Force Heather Wilson. “We expect this experience to help us drive down F-35 sustainment costs as we build a more lethal and ready Air Force.”

The current F-35 HPSI organization was established in 2016 in Crystal City, Va., at the F-35 Joint Program Office. HPSI supports a global fleet of more than 340 aircraft and when it moves to its new location will be led by the Air Force with a workforce from the Air Force, Navy, Marine Corps, international partners and industry. The organization will be directly accountable to the product support manager within the F-35 Joint Program Office.

This organization is an integral part of maintaining and prolonging operations of the global F-35 fleet.

For example, when the Autonomic Logistics Information System, or ALIS, recognizes that an F-35 requires a part replacement, HPSI locates and ships the part to the unit.

The combination of government and industry professionals working collaboratively will ensure HPSI has a performance-based focus on F-35 fleet users, while driving down costs.

“This is an important step in driving sustainment costs down as more of our allies and partners join us,” said Air Force Chief of Staff Gen. David L. Goldfein. “I continue to hear from my fellow air chiefs that they are not integrating the F-35 into their Air Force. They are integrating their Air Force into the F-35! Product support integration ensures this quarterback of the joint team has everything in the locker room needed to hit the field and win.”

The Air Force will now conduct the requisite environmental analysis. The final basing decision will be made by the secretary of the Air Force after the analysis is complete.